View of a railway bridge with a train passing 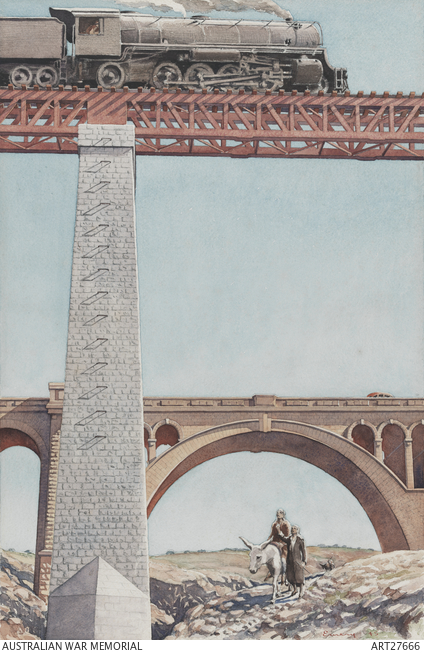 A highly graphic work: in the foreground is a viaduct on which a steam engine is travelling, in the mid ground is a bridge for cars and pedestrians. Below the bridges pass local men and donkeys. The wife of the artist described this work as representing a view of a newly constructed bridge with the first train, containing many VIPs, going over it. The train detail is likely to be very accurate. (561/001/004).
From file 561/001/004 fragment of an account of the construction of the Haifa-Tripoli Railway by Colonel Fraser (CO of Railway Survey Company... of which Emery was attached): 'The British War Office asked for the work to be completed in 18 months but it was actually carried out in 10 months. The officers and men of the Railway Unit took a keen interest in the work and felt that something had been accomplished towards the war effort. The fact that the section constructed completed the standard gauge railway link between London and Cairo added an historical note. The work relates to a map in our collection, also drawn by Emery, that commemorates the opening of the Beirut-haifa-Tripoli Railway in Syria in December 1942.