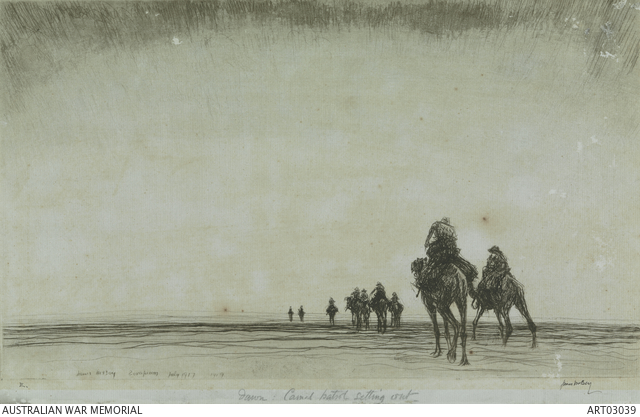 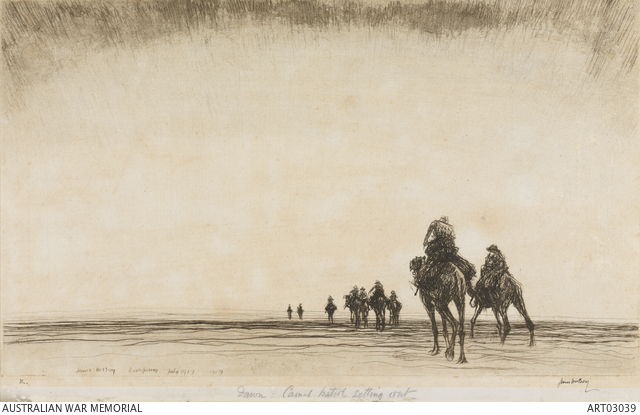 Depicts a patrol of soldiers and camels from the Australian Camel Corps heading away from the viewer into the distance of a desert. McBey has etched Serapeum onto the plate to indicate the place of the etching. A Serapeum is a temple or other religious institution dedicated to the syncretic Hellenistic-Egyptian god Serapis, who combined aspects of Osiris and Apis in a humanized form that was palatable to the Ptolemaic Greeks of Alexandria. Serapeum were at one time found throughout Egypt and during the First World War an army camp was located near one. This work is from McBey's first Palestine set of etchings and drypoints. McBey was a painter and etcher. Born in Newburg, Aberdeenshire, Scotland in 1884, he travelled to Holland, Spain and Morocco in 1913. He was one of Britain's most successful etchers before the war. Although rejected several times for military service he eventually managed to enlist in January 1916 and worked in the British army's printing section at Boulogne. He was appointed an official war artist in April 1917 and joined the British Expeditionary Force in Egypt, where he also travelled with and recorded patrols with the Australian Camel Corps. Before his appointment he was able to gain permission to spend his leave sketching at the frontline in France.