With the New South Wales contingent in the Sudan 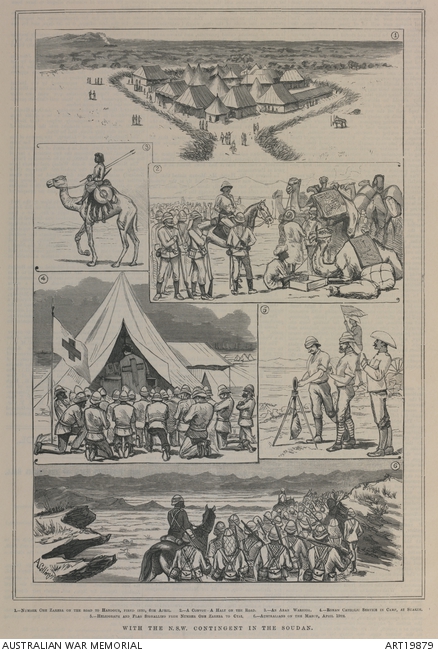 Depicts a series of drawings of the experiences of the NSW contingent in Sudan after Arthur Collingridge (1879-1901) who was a painter and illustrator of scenes. Collingridge worked for the 'London Graphic' and the 'Illustrated London News' before coming to Sydney in 1879, where he drew illustrations for the 'Sydney Mail' and the 'Town and Country Journal'. He became a staff artist on the 'Illustrated Sydney News' and later drew for the 'Commonwealth', an annual of Australian art and literature. In this work the images are of; top: fortified camp with tents close together and surrounded by a hedge, 2nd row: left - Arab riding a camel, right - couched camels and soldiers relaxing along the road, third row: left - a Roman Catholic service at, right: signallers using heliograph and flags, bottom: the NSW contingent marching back to to return to Australia. Between March- June 1885, the NSW Contingent served in Sudan, Africa. The contingent, an infantry battalion of 522 men and 24 officers and an artillery battery of 212 men, was ready to sail on 3 March 1885. It left Sydney amid much public fanfare, generated in part by the holiday declared to farewell the troops; the send-off was described as the most festive occasion in the colony's history. The NSW contingent anchored at Suakin, Sudan's Red Sea port, on 29 March 1885 and were attached to a brigade composed of Scots, Grenadiers and Coldstream Guards. Shortly after their arrival they marched as part of a large "square" formation -on this occasion made up of 10,000 men - for Tamai, a village some 30 kilometres inland. Not having participated in any battles, Australian casualties were few: those who died fell to disease rather than enemy action. By May 1885 the British government had decided to abandon the campaign and left only a garrison in Suakin. The Australian contingent sailed for home on 17 May 1885, arriving back in Sydney on 19 June. It was generally agreed at the time that, no matter how small the military significance of the Australian contribution to the War in Sudan, it marked an important stage in the development of colonial self-confidence and was proof of the enduring link with Britain.