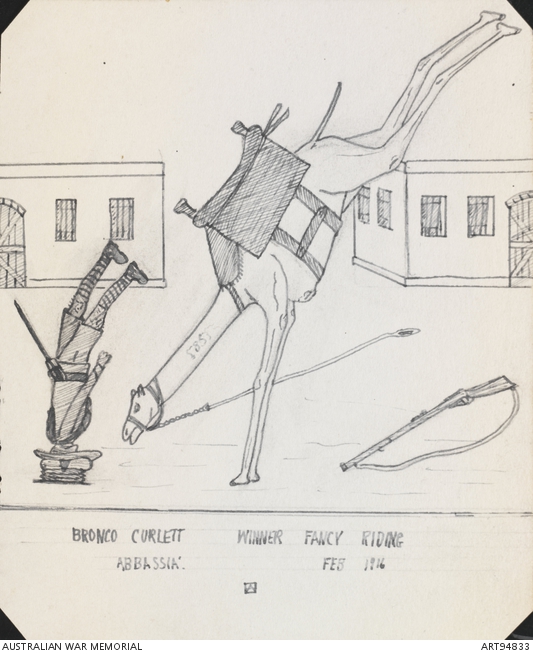 Depicts a soldier landing on his head after being tossed off the back of a camel. His rifle lies in the foreground and there are two buildings in the background. This image is associated with the 'Kia-Ora Cooee' magazine, which was written and illustrated by Australian and New Zealand troops serving in Egypt, Palestine, Salonica and Mesopotamia. It was printed in Cairo and appeared in monthly issues between March and December 1918. With ten issues in a single year it seems to have been the service magazine with the longest and most regular record of publication. The security of the base in Cairo, and the availability of a commercial printing establishment, enabled the editors to produce a magazine which was in every respect thoroughly professional, attracting advertising revenue and making a comfortable profit. Australian soldiers wrote about all aspects of their war experience in broadsheets, newspapers and magazines which were produced on the troopships, in the trenches and back at their bases. The Kiaora Coo-ee was one of the most successful widely distributed of these publications. It was the official magazine of the Australian and New Zealand armies in the Middle East and was professionally printed by the Sphinx Press in Cairo. The average monthly distribution of The Kiaora Coo-ee was some 13,000 copies and it covered themes ranging from the quality of the food and the level of physical discomfort to irreverent digs at authority. The magazine ran poetry, prose and illustrations. There was a large pool of talent on which to draw; possibly the most famous contributor was Banjo Paterson, who contributed several poems and short stories while serving as an officer in Egypt. The Kiaora Coo-ee was keenly sought as a souvenir, and some soldiers arranged for copies to be sent directly home, with payment being deducted from their wages. This may explain why so many copies have survived.