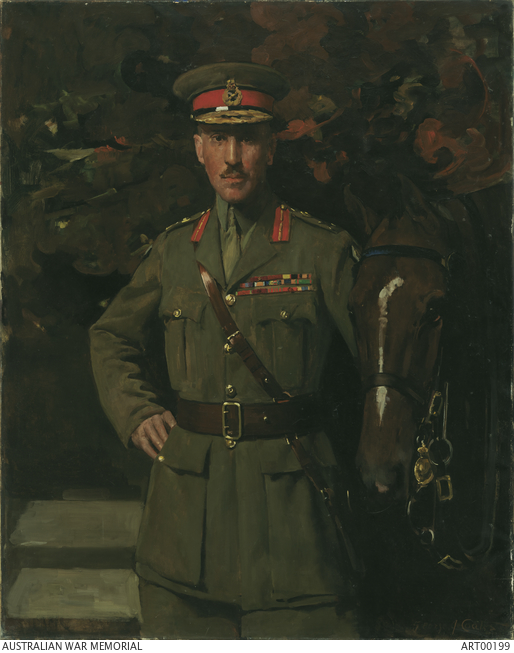 Portrait of Major General (later Sir) Neville Maskelyne Smyth VC, KCB. Commanding 1 Brigade AIF, Commanding 2 Div AIF, Western Front Chelsea; 1st Australian Infantry Brigade, and 2nd Australian Division. Major General Sir Nevill Maskelyne Smyth, VC, KCB (1868-1941) was an English recipient of the Victoria Cross, the highest and most prestigious award for gallantry in the face of the enemy that can be awarded to British and Commonwealth forces. Smyth was dispatched to Gallipoli by Lord Kitchener arriving in May 1915. He commanded the 1st Australian Infantry Brigade as a temporary brigadier-general at the Battle of Lone Pine and was one of the last officers to leave the peninsula, he was appointed Companion of the Order of the Bath (CB) on 1 January 1916, and received a further Mention in Despatches on 28 January 1916. Smyth led the brigade in France in 1916, and on 28 December was given command of the 2nd Australian Division as a temporary major general. During the First World War he had also been awarded the Belgian Croix de Guerre and the French Légion d'honneur in the grade of Officer. He was appointed Honorary Colonel of the 3rd Dragoon Guards on 1 October 1920 and retired from the British Army in July 1924. After his retirement, Smyth emigrated to Australia and a farm in Balmoral, Victoria in 1925 with his wife and three children. He took to politics in the National Party of Australia and stood unsuccessfully for a Victorian seat in the Australian Senate.
George Coates (1869-1930) studied painting under L. Bernard Hall between 1895-96 acquiring both respect for the painter's craft and the approach of the Munich School. He won a travelling scholarship in 1896 and went to London next year before moving to Paris, where he worked at the Académie Julian and studied under Jean Paul Laurens. In Paris Coates renewed an acquaintance with a fellow art student, Dora Meeson (1869-1955) who later became his wife. Coates and Meeson established themselves in Chelsea, London where they became members of an extensive circle of Australian expatriate artists. Coates established himself as one of London's leading portrait painters, where he lived until returning to Australia in 1921, and his realism and representational style emphasized a harmonious range of low tones, with a detailed and painstaking approach.