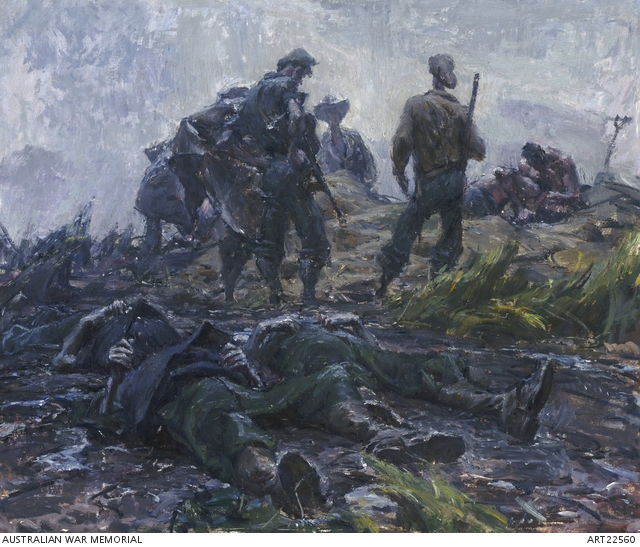 On the afternoon of 29 July 1943 three sections of Major George Warfe's 2/3rd Independent Company attacked Timbered Knoll, a Japanese position on the slopes of Bobdubi Ridge in New Guinea. That attack, involving fewer than 50 men and lasting less than two hours, was only one of the dozens of small actions in the liberation of Australian New Guinea. This particular attack however, did inspire Ivor Hele's painting 'Battlefield burial of three NCOs. The attack cost the lives of three of the company's non-commissioned officers. They were: Sergeant Andrew 'Bonny' Muir, 27, a land agent and auctioneer from Preston, Victoria; Corporal Donald Buckingham, 35, a mining rigger from Victoria Park, Perth; and 22 year old Corporal Percival Hooks also of Perth. As dusk and rain fell, Warfe's men buried the dead and prepared to meet a possible Japenese counter attack. As the men gathered around the graves Hele pulled out a pad from his map case and sketched the dead men being carried to the burial site, and the bodies lying in the foreground as men dug graves. Unusually for official art the sketch showed Australian corpses. It testified to the waste of war without losing their humanity or intruding on the privavcy of grief. Returning to Australia later in 1943, Hele worked the sketches into an oil painting, carefully crafting the striking scene of this powerful work 'Battlefield burial of three NCOs'.