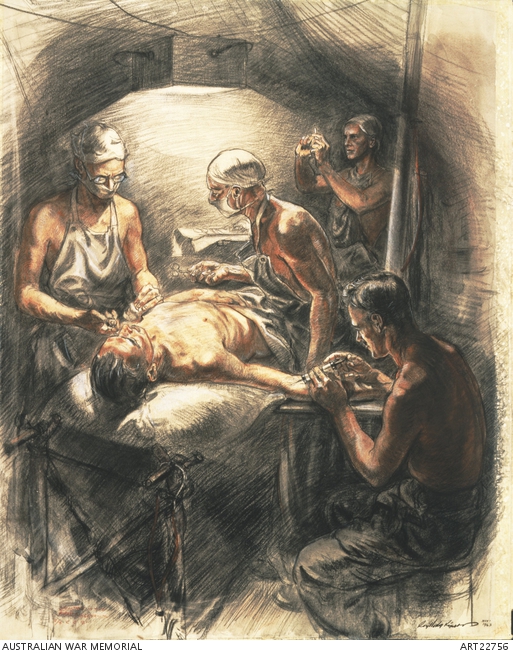 Shows Captain Ray H Kaines, Australian Army Medical Corp, surgeon, removing a foreign body from the pectorals major. Major A.C Mendelsohn, Australian Army Medical Corps, physician, on extreme right is shown given an intravenous injection of pentothal, which takes the place of usual anaesthetic and leaves no trace of nausea. Sergeant West, Australian Army Medical Corps, theatre orderly, on left, is ready to hand to the surgeon a pair of forceps. In the background an orderly is sawing off the top of a phail of pentothal. The tent is blacked out because of it's proximity to the front line, making it stifling hot for the inmates. The heat is intensified by the four powerful globes set in a half biscuit tin and arranged to throw a showless glow. The operating table consists of an ambulance stretcher mounted on forked sticks, and bound by signal wire. The inmates, except the anesthetist, wore long rubber aprons. Electricity was generated by a small petrol motor, New Guinea.