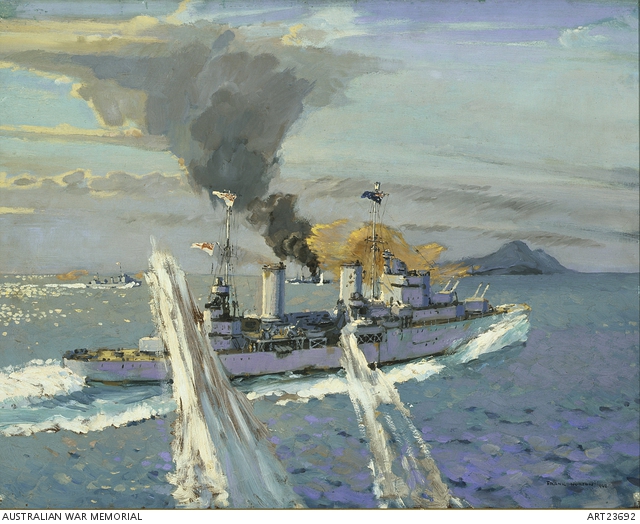 The scene depicts the phase in the action when HMAS 'Sydney' has hit and stopped the Italian cruiser 'Bartolomeo Colleoni' and at 4-5 miles distance is steaming past the vessel in pursuit of the second enemy cruiser. The British destroyer 'Hyperion', still firing, is closing prior to firing the torpedoes which destroyed the burning ship. The second cruiser, the 'Giovanni Delle Bande Nere' (making smoke), has rounded Cape Spada and is making smoke in her efforts to get away. In the running fight both vessels continue to fire salvoes, the Italian with her after turrets and the 'Sydney' with her foremost (A and B). X and Y guns, although brought to their maximum bearing, cannot be trained on the enemy. 'Sydney's' foremost funnel shows signs of damage from the direct hit received on the port side some 15 minutes earlier, Mediterranean Sea of Crete.