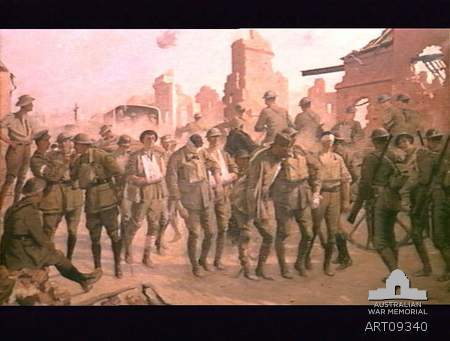 Depicts a scene in the devasted village of Templeux-le-Guerard, with strings of American, Australian and German 'walking wounded' from the Battle of the Hindenburg Line, making their way to a casualty clearing station, after treatment at one or other of the aid posts and dressing stations close to the front. Passing them are fresh troops and portions of an Australian field battery, on their way to the Western Front. As the village is within range of the German guns, almost all the troops are wearing their gas-helmets at the 'elert'. Painted from sketches made during the battle by Captain Stewart, an officer of the Royal Engineers, who held the appointment of Camouflage Officer with the Australian Corps.