[An Austro-Hungarian unit in their billets] 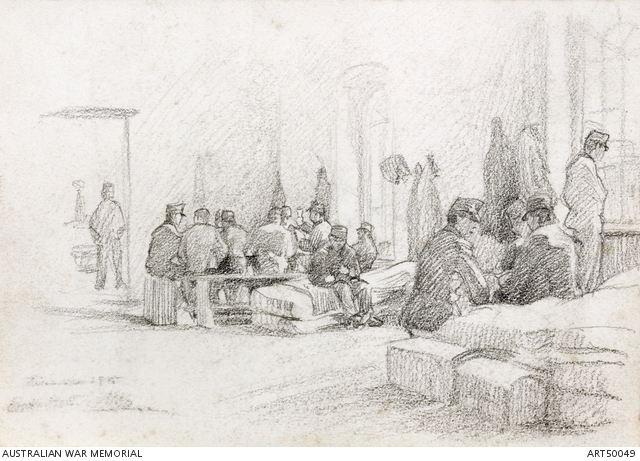 A group of soldiers wearing caps seated relaxing in a room with arched windows. They are troops from an unidentified Austro-Hungarian unit in their billets. This work was done while Arthur Gardener was in Hungary during the First World War. The artist changed his name from Baumgarten to Gardener after he migrated to Australia at the age of 30 on the 8th of March 1938, landing at Fremantle. "I was prompted to this decision by economic and political reasons, seeing no future for me and my wife in fascistic Austria under Schuschnig's government" he wrote. He had served as an artillery photographer with the Imperial Austra-Hungarian Army after which he set up his own photographic studio. Following this he worked as a salesman at the Australian Fiat Automobile works in Vienna before being dismissed from office after the German occupation. In Australia, at the age of 58, Private Arthur Gardener, assisted in the efforts of the Second World War on the home front in the 3rd Australian Employment Coy (N303400).