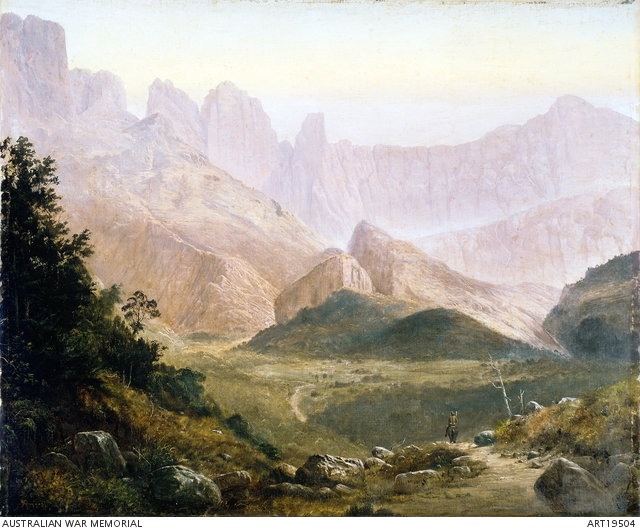 The subject for this painting is Van Reenan's Pass in the Drakensberg Mountains, South Africa, on the border of Natal and the Orange Free State. Painted in Tasmania, it is believed that the artist drew from a photograph of the region by A.W. Frodsham, depicting a similar landscape. The photograph was published in Bennet Burleigh's 'The Natal Campaign', London, 1900. Considering that there is no evidence to suggest that the artist travelled to South Africa, it is likely that the source for this painting was the photograph. This area was of great strategic importance as it was the location through which the main road and rail link passed. Haughton Forrest (1826-1925) was born in France. Young Haughton was subsequently educated in Jamaica, where his father had extensive sugar plantations, and at a military college at Wiesbaden, Germany. In 1852 he obtained a commission in the Honourable Artillery Company of London; he later joined the 31st Royal Monmouth Light Infantry, but resigned after attaining the rank of captain to work for the Post Office in London. He lived on the Isles of Wight and Man in southern England where he spent much time yachting and painting marine subjects. In 1876 Forrest migrated with his family to 100 acres in north-eastern Tasmania. Later he moved to Sorell where he obtained municipal appointments as bailiff of crown lands and of the court of general sessions, inspector of nuisances, of weights and measures, of thistles and of stock. He was also superintendent of police. Forrest spent the rest of his life after 1881 fully devoted to his art, painting many marine subjects and landscapes. His output, which spanned some seventy years, was prolific, and varied from small oils, painted on board, to large canvases. Many of his landscapes were peaceful, with mystical backgrounds of hazy blue or purple mountains. The extreme detail and exactitude of Forrest's technique gave his works a photographic quality.