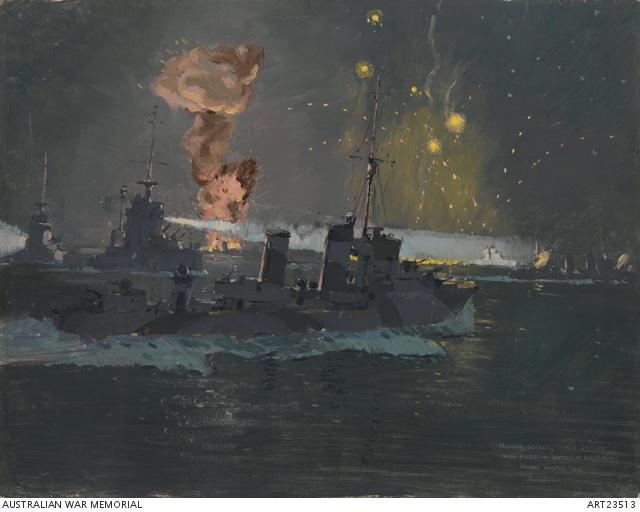 Mediterranean Sea; foreground: HMAS Stuart, l: probably HMS Havock, background: two Italian Zara-class heavy-cruisers. Depicts the Battle of Matapan, Greece on 29 March 1941. HMA Stuart was among 13 allied ships involved in the battle which saw the loss of five Italian ships and over 2,300 men. Victory at Matapan gave the allies control of the Eastern Mediterranean until the end of the campaigns in Greece and Crete. Cape Matapan was an important strategic victory for the British who could now concentrate most of their stretched resources against General Rommel in North Africa. The battleships have hit two of the Italians; one is steaming towards the enemy ships while the battleships are turning to starboard. The searchlight of the leading RN battleship "Warspite" has caught an Italian cruiser in its beam. This impression is from Captain Waller's (Captain of "Stuart") report and description and approved by him.