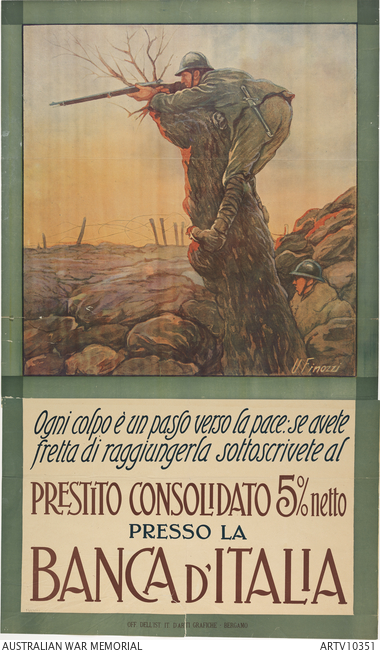 An Italian First World War poster advertising the sale of war bonds. It was designed by Ugo Finozzi and printed by the Workshop of the Italian Institute of Graphic Arts, Bergamo, for the Bank of Italy. The image features an Italian sniper, with his back to the viewer, taking aim at an unseen enemy from the elevated cover of a damaged tree. Another soldier watches on from the base of the trunk. Evidence of the devastation of the battlefield surrounds them. The effect is to give the viewer the same perspective as the sniper. In combination with the text the message implies that each bond purchase will have the same effect as a shot from the sniper's rifle. This propaganda device was popular during the First World War most memorably in the 'Feed the Guns' campaign in Britain.

The image is positioned in the top half. The title printed in dark blue and red set against a cream background takes up the lower half. Both the image and text are framed within a olive green border. The text translates as follows: 'Each shot is a step towards peace: if you want to reach it soon, subscribe to the consolidated bond programme 5% net at the Bank of Italy'.