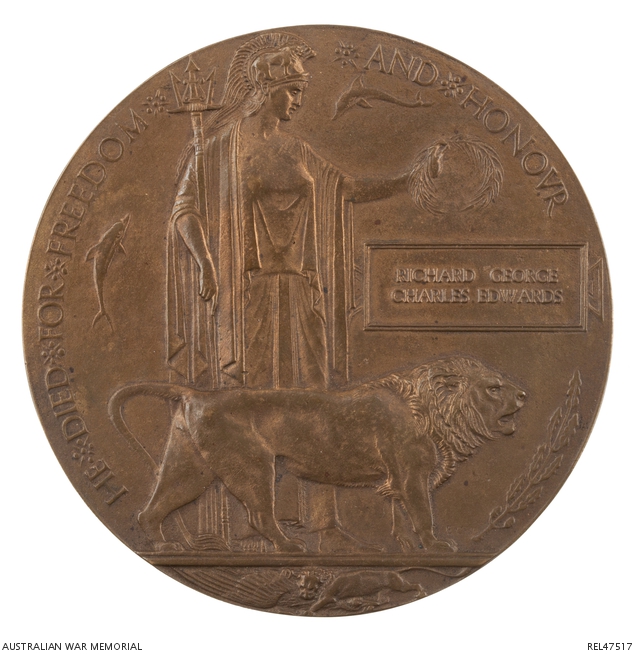 Bronze next of kin plaque, showing on the obverse, Britannia holding a laurel wreath, the British lion, dolphins, a spray of oak leaves and the words 'HE DIED FOR FREEDOM AND HONOUR' around the edge. Beneath the main figures, the British lion defeats the German eagle. The initials 'ECP', for the designer Edward Carter Preston appear above the lion's right forepaw. A raised rectangle above the lion's head bears the name 'RICHARD GEORGE CHARLES EDWARDS'.

Born in Launceston, Tasmania, Richard George Charles Edwards, was living in Richmond in Melbourne and working as a labourer when he enlisted in the AIF on 3 October 1916. He had married Edna May Roberts in 1914; Their only child, Violet May, was born in 1916. After initial training he was posted a private, service number 6332, to the 18th Reinforcements for 22nd Battalion. He embarked from Melbourne on 23 November, aboard HMAT A20 Hororata and arrived in England at the end of January 1917.

Edwards contracted mumps and after he recovered was sent to the 8th Training Battalion at Larkhill for further training. He joined his battalion at Beaulencourt in France in July 1917. At Broodseinde Ridge, Belgium, on 4 October, he was wounded in the left hand. He was treated in a number of hospitals and rejoined his battalion in February 1918. On 14 August 1918 Edwards left France for two weeks' leave in England. He returned to his unit on 1 September. Edwards was killed the following day at Tortille Trench, between Mont St Quentin and Peronne. He is buried in the Peronne Communal Cemetery Extension.

This commemorative plaque was sent to his widow, Edna, in December 1922. She had remarried, before the end of 1918, Ernest William Bannister, a returned veteran also living in Richmond. He had served with 24th Battalion, had been injured by the premature explosion of a grenade in 1916 in a training accident, and in 1917 was diagnosed with tuberculosis and nephritis. He returned to Australia for medical discharge on 21 July 1917, and was noted as having made a marked improvement on the sea voyage home. Bannister relapsed in February 1919 and was treated first at the Macleod Sanitorium before being transferred to the Austin Hospital, where he died in early April. His death was deemed to be a result of military service and Edna received a second commemorative plaque in his name, as well as a widows' pension. Their son, Robert Douglas Bannister was born posthumously later in 1919.