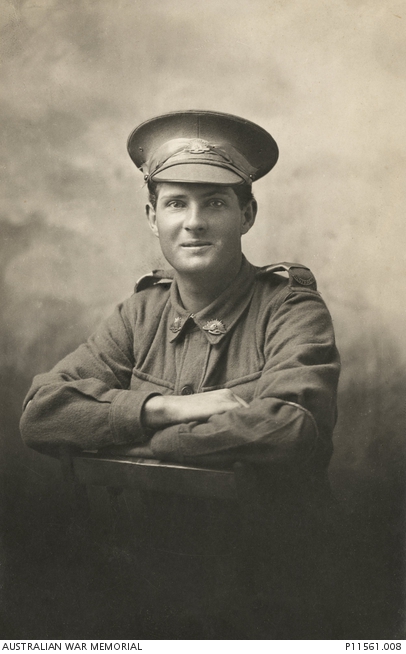 Portrait of an unidentified Australian servicemen, possibly 92871 Private (Pte) Arthur Percy Holden of Manning River, NSW. Holden enlisted in May 1918 aged 19 years, however was prevented from embarking by his father who sent an urgent telegram to Hyde Park Barracks refusing consent for his son to enlist until he came of age. By the time this occured, the war had ended. One of a series of photographic portraits received by Miss Melvie Millicent Gill through her correspondence with Australian servicemen during the First World War. Melvie Gill was born on 23 March 1897 in Jones Island, Manning River, NSW. In her late teens during the war she corresponded regularly with Australian soldiers and in 1922 married one of them, Erwin Walter Williams (7079 Pte Williams, 2nd Machine Gun Battalion). She passed away on 9 May 1980 in Tamworth, having retained her collection of portraits for her entire life.