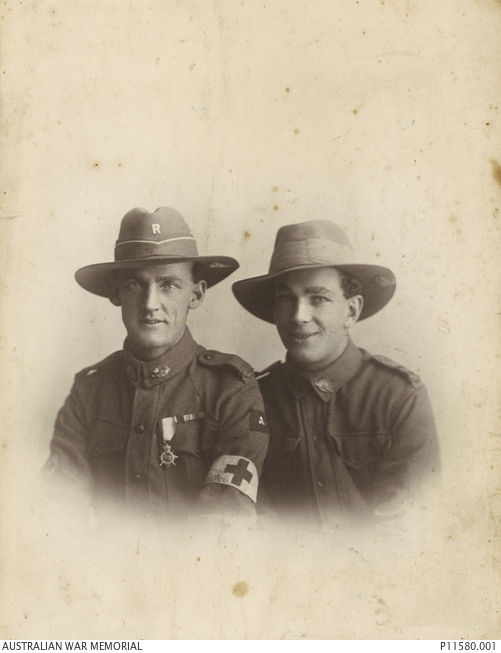 Studio portrait of 647 Private (Pte) Varney Francis Bugden, 2nd Australian General Hospital, (left) and N96720 Pte Timothy Augustus (Gus) Mayberry probably taken at Goulburn, NSW. Pte Bugden, a hospital attendant from Bathurst, NSW embarked from Sydney on HMAT Kyarra on 28 November 1914. Later transferring to No 9 Dental Unit he developed sub-acute bronchial pneumonia and phthisis. He returned to Australia and was medically discharged on 4 October 1916. He later died in a motorcycle accident in Goulburn in 1924. Note that he is wearing a ribbon bar, a 1914-1915 Star, a colour patch with brass Anzac "A" indicating service at Gallipoli, rising sun badges, a red cross brassard, an Australian Army Reserve brass "R" attached to his slouch hat and a white stripe on his puggaree. Pte Mayberry, a junior porter from Goulburn, NSW prior to enlistment, enlisted on 18 October 1918, too late for overseas service. Re-enlisting in the Second World War with the service number NX60114, he served with the 2/12th Field Ambulance in Singapore where he was promoted to Warrant Officer Class 2. On 14 April 1943, he was reported as missing. It was subsequently determined that he was captured by the Japanese and interned as a prisoner-of-war. On 8 September 1945 he was recovered from Changi and returned to Australia. He continued to serve with the 10th Australian General Hospital with the rank of Lieutenant and was discharged on 5 March 1946.