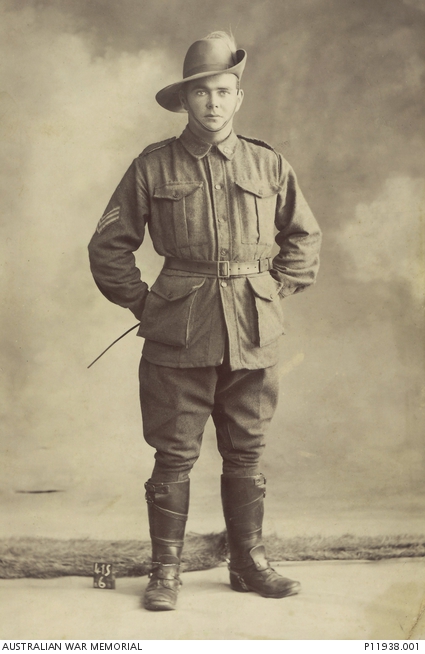 Studio portrait of 378 Sergeant Charles Douglas Garden, 8th Light Horse Regiment, of Stratford, Victoria. A farmer and serving member of the 13th Light Horse Regiment prior to enlistment on 19 September 1914, Lance Corporal (LCpl) Garden embarked from Melbourne on 25 February 1915 aboard HMAT Star of Victoria (A16). He served at Gallipoli from May 1915 until 7 August when he suffered gun shot wounds to the left thigh and was evacuated, first to Hospital Ship Delta, then No. 1 Australian General Hospital in Heliopolis. He rejoined his unit a month later and served the remainder of the war with both the 8th and 3rd Light Horse Regiments in the Middle East. Promoted to Sergeant in June 1916, Garden attained the rank of Squadron Quartermaster Sergeant (SQMS) in December 1917. SQMS Garden survived the war and returned to Australia in early 1919.