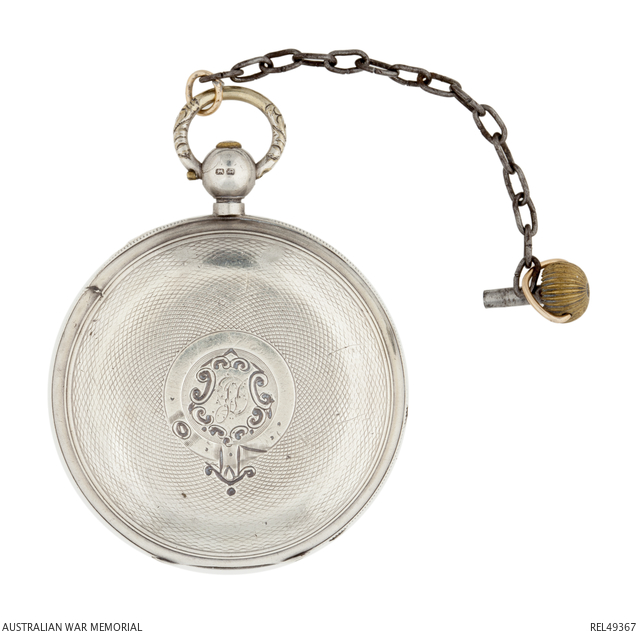 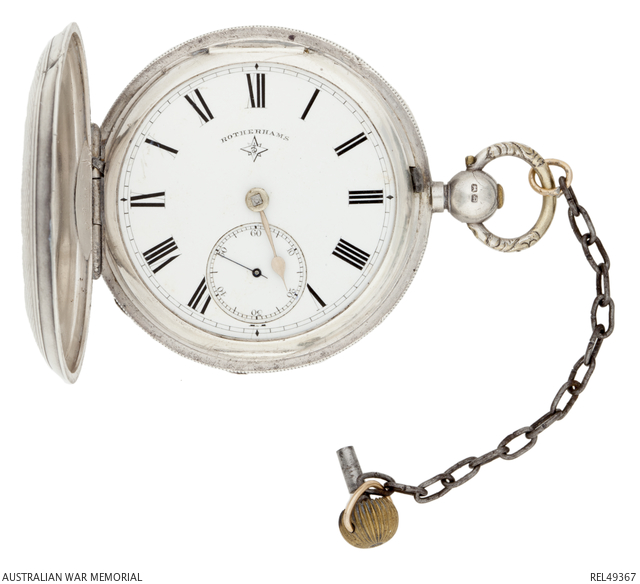 Silver fob watch with winding key attached by chain. The glass is missing as is one of the hands. White enamel face with Roman numerals and second hand sweep at 6 o'clock. Manufacturer's details and hallmarks are impressed inside the hinged covers. The face of the front cover has an engined pattern and the Rotherhams' shield monograph with an ornate 'JD' engraved in centre.

Related to the service of 34 Trooper James Daniel Duff. Duff was born in 1875 at Tingha in NSW. He enlisted into A squadron of the New South Wales Citizen Bushmen, which formed part of the 3rd New South Wales contingent to South Africa. The contingent left Australia on the 28th of February 1900 and originally served much of their time in Rhodesia before moving to the Elands River Post.

On the 4th of August during the first day of the Elands River Siege, Duff took a pom pom round to the chest and was killed instantly. At the time he was in a ‘trench’ that was commanded by Captain James Francis Thomas, later to find fame as the lawyer for Harry 'Breaker' Morant. That night Duff's body was buried with Trooper John Waddell who had been killed earlier in the day. Buried beside them over the following days were Trooper James Edwin Walker and Squadron Sergeant Major James Mitchell. The original slate grave marker of the four men was rediscovered in 1965 and donated to the Australian War Memorial. See REL/03377.

The siege of Elands River has been described as one the greatest achievements of the Australians during the course of the war in South Africa. The author, Arthur Conan Doyle, then working as a doctor with the British forces in South Africa, wrote in his book 'The Great Boer War': 'When the ballad-makers of Australia seek for a subject, let them turn to Elands River, for there was no finer resistance in the war.' An officer of General Broadwood's Cavalry Division wrote with even greater enthusiasm: 'Oh! I do hope Great Britain will show its gratitude to these Australians for the brightest page in the history of the war...I tell you these men deserve anything the old country can give them. I am sure there is nothing like it in the history of the world. Bravo, the colonials!'