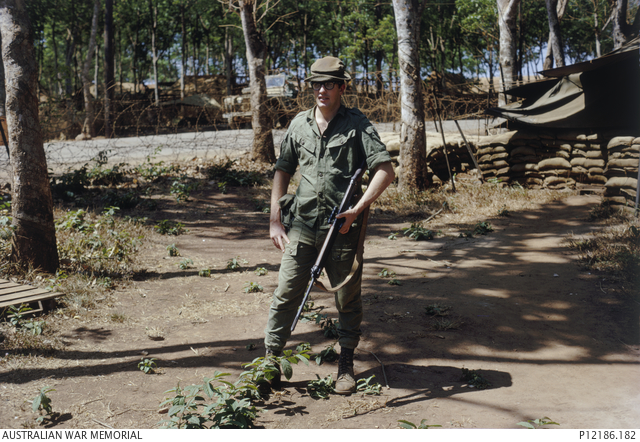 Portrait of 2784336 Signalman (Sig) Stuart Lindsay Weller, 104 Signal Squadron, in newly issued Army uniform. One of 477 colour 35mm transparencies taken or collected by Sig Weller relating to his service in Vietnam between 1967 and 1968. Sig Weller remembers: "It was a cheeky little number that came with sloping pockets in the shirt, elastic bottomed trousers and it fitted like a glove. This was the very latest in Australian army issue jungle greens. ... Sadly, there was a downside to the new greens ... The Australian army, in a dress sense, had sauntered along for many years being practical and sticking with what had been proven to be effective. Of late, however, somebody had been complaining and it came as a bit of a surprise to realise the army might just have been listening. The jungle greens we’d been issued with were made from a fairly thick material and in Vietnam we all found them quite hot. I’m not sure what the infantry thought of them but I’d have guessed the thick material would have been just the cat’s meow out in angry country as it would have offered a very real degree of protection against thorns, biting insects and leeches. They would’ve been hot but the protection element might just have outweighed the heat factor. But the army decided the digs were to get a new jungle green uniform and that’s that. I’m not exactly sure when the new greens arrived in country, but we all lined up for the issue. Rule ten: If the army’s handing out something for free – grab it. It doesn’t matter what it is – grab it. They generally don’t give you a second chance. They looked great and were styled in such a way that they fitted the wearer quite tightly. This was apparently an effort by the army to clean up a problem they saw with soldiers having the current loose-fitting greens snag on the jungle undergrowth. The new cut might just eliminate this. They had extra pockets, which the man in the bush might appreciate. The material was lightweight and would dry more quickly than the present heavy weight, which again, the man in the bush should appreciate. Yep, we all figured the army had come up with a winner. It wasn’t long however, before we began to realise something was amiss. Because they were so tight air didn’t circulate around the body as it had done with the old style, so if anything, they were hotter. Because the material was thinner mosquitoes and other biting insects dive-bombed straight through. There were times, just after the issue (when everybody was wearing them) when it was difficult to hear the movie at nights as the blokes were forever slapping at the insects that landed and poked easily through the material. The design had more pockets its true, but because the cut was tight fitting, very little could be put in them. With the old greens’ loose fit, a soldier could almost carry a day’s rations in the thigh pockets alone. The whole suit was machine sewn and that included the putting on of the buttons. Pop one thread and before you knew it the button had fallen off or the seam had opened up because the thread had peeled away. Most of us were involved at sometime or tother in heavy work and caught clothes on sharp edges regularly. With the old greens, because the material was so tough, a hole might be made but it would only be a small one. The new material however, opened up like hot butter and almost refused to stop tearing. The coup de grace however, was the stitching – they’d used rayon or some other synthetic material instead of cotton. All our greens were sent to Baria for washing (thought some guys washed their own in camp) and the method down there was to throw them into a 44 gallon drum with some washing powder and then boil the hell out of them. The stitching didn’t like that. The first bloke in 104 to discover that heat was a no-no, worked in the Orderly Room. Everybody there had to look just right for the officers and this meant, if you were trying to impress, you’d iron your greens. The story that circulated, said the fellow had washed the greens himself, ironed the shirt, hung it on a coat hanger, ironed the trousers and turned to hang them up when he discovered there was nothing on the hanger. He now owned however, a pile of very neatly cut green pieces of material that would, if he felt so inclined, make up again into the shirt he’d once worn. It didn’t take more than a couple of washes in Baria before all of us were able to give a sleeve a tug and have it, or more than likely 4 or 5 pieces of material come away in our hand. We junked the lot, the army went back to the drawing board and we went back to the old greens for the rest of our tour."