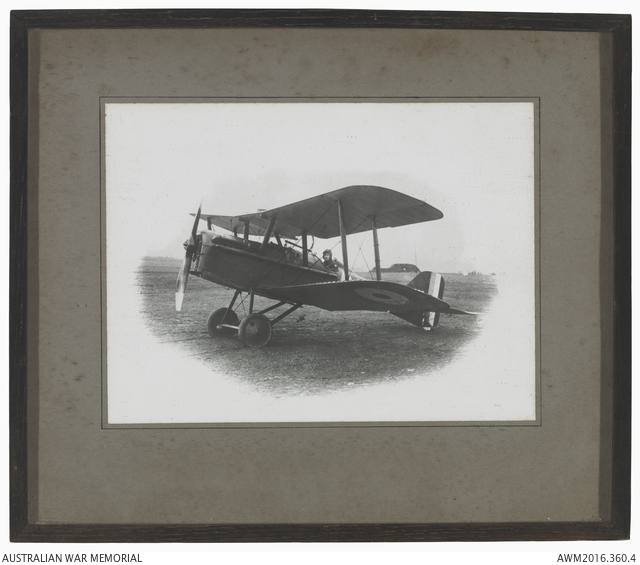 An SE5a British aeroplane piloted by Captain Roy Cecil Phillipps, Australian Flying Corps (AFC). Roy Phillipps was born in Moree, NSW on 1 March 1892. Following the death of his father, William Hargreaves Phillipps, he moved with his mother, Mrs Cecil Raymond Phillipps to Perth. Roy was schooled at Perth High School then studied to be an accountant, eventually working for the pastoralist firm Connor, Doherty & Durack Ltd in the Kimberley region until enlistment in April 1915. Following training at the 28th Battalion school of instruction he applied for a commission in the AIF and was appointed a 2nd Lieutenant (2nd Lt) in the 28 Battalion. Embarking for Egypt on board HMAT Ascanius on 9 June 1915, 2nd Lt Phillipps served on the Gallipoli peninsula, after which he was promoted to Lieutenant (Lt). Proceeding to France in March 1916, Lt Phillipps took part in the famed 'Black ANZACs' night raid at Armentieres on the night 6/7 June 1916, for which he is mentioned in the Official History (see Bean, Vol III, Chapter IX, page 247). At Pozieres on 5 August 1916 Lt Phillips suffered a gun shot wound to the right thigh and was repatriated to England and hospitalised at Wandsworth Hospital, London. After rejoining his battalion in October 1916 with the rank of Captain (Capt), Phillipps was wounded a second time whilst in the Guedecourt sector, and was again repatriated to England to recover. Captain Phillipps was discharged from 3rd London General Hospital on 2 March 1917. Being incapacitated from further infantry service, he lowered his age (changing his date of birth to 1896) and transferred to 68 (Australian) Squadron Royal Flying Corps where he flew the SE-5 on reconnaisance sorties in Northern France and Belgium. He was awarded the Military Cross (MC) in February 1918, with the bar added in June 1918, both for excellent reconnaissance work and forcing down enemy aircraft. He received the latter award from the King at Buckingham Palace on March 9 1919. In August 1918 he was awarded the Distinguished Flying Cross (DFC) for bringing down yet another enemy aircraft, and in October 1918 he was promoted to Major (Maj) and assumed command of the Squadron. By the end of the First World War, Maj Phillipps MC & Bar DFC had a tally of 15 confirmed victories over enemy aircraft. Phillipps married Miss Ellen Hillman Robinson, daughter of Mr R.T Robinson, K.C., Attorney General for Western Australia, on 8 September, 1917 at St Mary Abbott's, Kensington. It was reported at the time that the bridegroom only obtained leave for the wedding the previous day. Following the war, he oversaw his own property near Moree before being recalled to duty on the eve of the Second World War. Squadron Leader Phillipps was killed on 21 May 1941 in an aircraft accident near Archerfield, Queensland, aged 45.