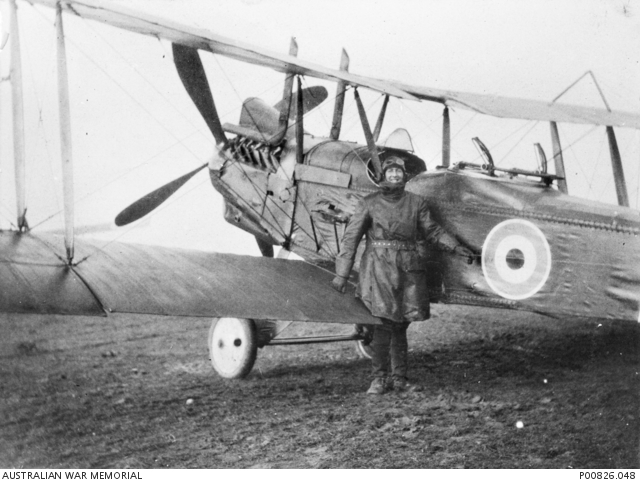 Outdoor portrait of Lieutenant Leslie Simeon John Sell, Australian Flying Corps (AFC) from Albert Park, Melbourne, Victoria beside a Royal Aircraft Factory RE8 two seat reconnaissance aircraft. A 25 year old photographer prior to enlisting on 23 October 1916 as 944 Private Sell, he was then designated as an Air Mechanic 2nd Class. He embarked for overseas with No 4 Squadron Headquarters from Melbourne on 17 January 1917 aboard RMS Omrah. After arriving in England, he undertook further training that lead to promotion and on 20 December 1917 he was commissioned as a Flying Officer (Second Lieutenant (2nd Lt) in AIF). In March 1918 he joined No 3 Squadron AFC in France. This squadron was the first Australian flying unit to arrive on the Western Front and operated against the German Spring Offensive of March 1918. It was during these operations that 2nd Lt Sell was shot down on 25 March 1918 and died later that day of his wounds. He is buried in the Hazebrouck Communal Cemetery, France. [See also image P00826.078]