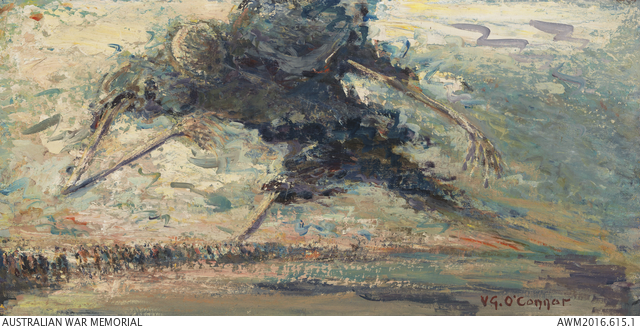 Death March provides overarching critical commentary on suffering and the loss of life caused by conflicts in the twentieth century. It is undated but believed to have been painted in the early 1970s, responding to the recurring instances of mass suffering and death in the twentieth century. Vic O’Connor was a Melbourne social realist artist who created striking, vigorous and compassionate depictions of complex socio-political issues and the devastating futility of war.

O’Connor’s energetic brushstrokes and choice of colours in Death March convey an intensity of feeling. Short, vertical brushstrokes process from the lower left edge of the composition to beneath the skeletal legs of the looming figure personifying death. These brushstrokes give the impression of human figures, possibly civilians or soldiers. O'Connor's technique heightens the emotional turmoil in the scene’s evocation of death at the mercy of an indistinct, monstrous form; its hazy outline presenting death as a pervasive force.