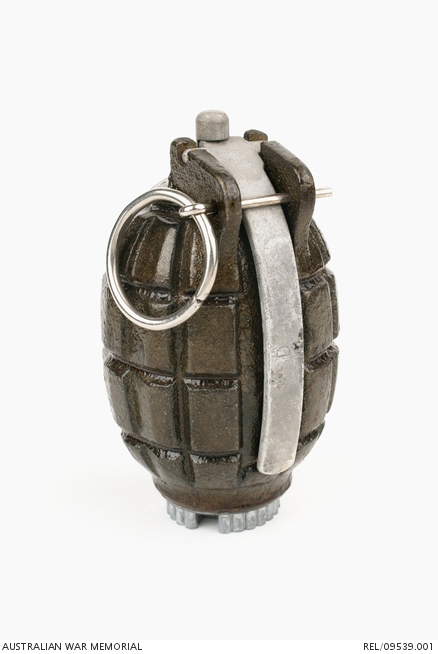 A No 36M Mark 1 HE (high explosive) grenade for booby trap use. The No 36M grenade is essentially the same as a No 36 HE grenade except the 36M was fitted with an instantaneous detonator rather than the 4 or 7 second delay fuze. The body is oval shaped and is made from cast iron. The wall is segmented in an attempt to control fragmentation. A screw plug is formed on the side for filling the high explosives. There is a large diameter hole in the base of the grenade body and a small hole diametrically opposite. The centre-piece, which contains the striker assembly and the detonator, screws into the base of the grenade. The curved striker lever is positioned on the side of the grenade body and fits closely to the grenade body. The end of the striker lever fits into a slot and is secured by a retaining pin that prevents the striker from being forced down onto the firing cap. The body of the grenade is painted black. Inscription - Z (base plug), 1945.

The No 36M Mk 1 was a standard anti personnel booby trap grenade used by the Australian forces during the Second World War.