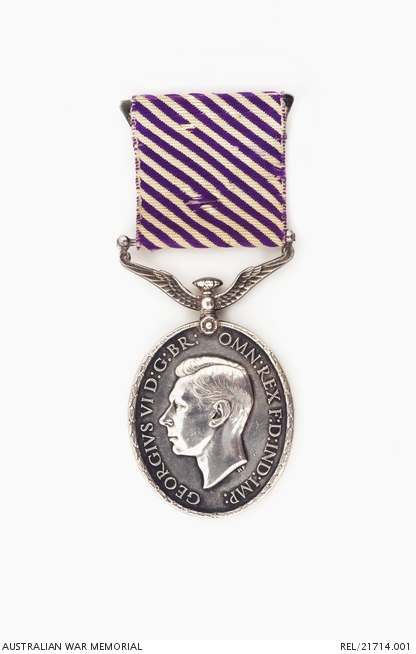 15032 Flight Lieutenant Stephen Joseph Mondel, RAAF, served in 57 Squadron, RAF (Lancasters). He enlisted the RAAF in 1940 and trained in Australia as a Fitter. He joined 456 Squadron RAAF in North Wales in June 1941, as a Sergeant Air Gunner. Mondel subsequently qualified as a Flight Engineer and was posted to 57 Squadron RAF based at Scampton near Lincoln. He was awarded the Distinguished Flying Medal on 14 September 1943. The citation reads: 'Sergeant MONDEL has displayed outstanding skill as flight engineer in many operational missions. He has been most reliable member of aircrew and by his vigilance has warned his captain of approaching enemy fighters on more than one occasion. On his first operational flight, the aircraft was in difficulties during most of the return flight from Genoa and arrived over England in extremely bad weather with fuel supply almost exhausted. When the captain ordered the crew to leave the aircraft by parachute, this airman gave all possible assistance to each member and throughout the prolonged emergency worked calmly and without confusion and was of the greatest assistance to his captain. His work on the ground has been also outstanding and in the capacity of flight engineer leader he has shown a high standard of leadership'. Mondel was posted to India in August 1943 to work with 1577 (Special Duties) Flight using his engineering expertise to assess radar and technical problems associated with towing gliders, such the Horsa and Hamilcar, in the tropics. In July 1944 he returned to Australia and was posted to 7 OTU at Tocumwal. He was discharged in September 1945.