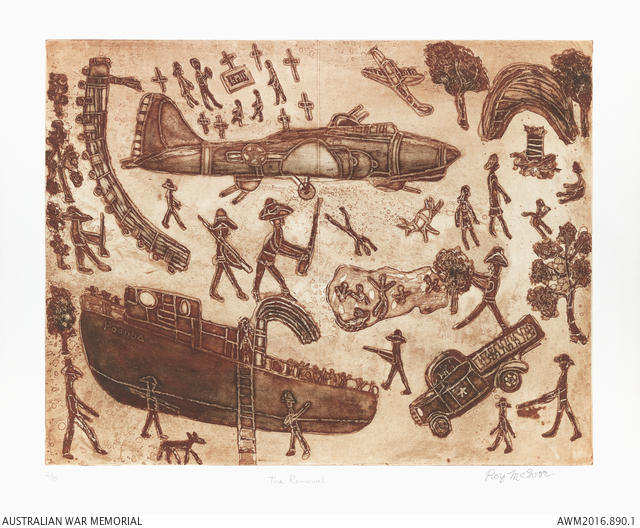 On 17th May 1942, 235 Guugu Yimithirr people living in the Lutheran Mission of Cape Bedford, 50km north of Cooktown, North Queensland, were forcibly removed 1500km south by Armed Forces to the Woorabinda Mission west of Rockhampton. This print is a visual depiction of the removal of the Cape Bedford community as recalled by Roy McIvor, the artist, who was a child at the time.

'During World War II, when I was 10 years old my entire community of Hope Vale in Far North Queensland was rounded up by the army and forcibly transported south from our tropical Cape York to arid country. It was a traumatic upheaval and nearly one-quarter of the people died as a result of our banishment. Suspicions about loyalties of the German-Lutheran mission prompted allegations of a possible invasion, supported by Aborigines and that our people would use our bush expertise to lead the Japanese soldiers through un chartered territory. Without any food or water, army trucks arrived on that May Day in 1942 and the community was forced by steamboat, then by train to Woorabinda Aboriginal reserve west of Rockhampton, a distance of 1,500km. Many of my people died as a result including my sister Emily. Nearly 10 years later we were eventually returned to Hope Vale.' Roy McIvor, artist statement 2015.

Roy McIvor (1934 - 2018), a senior Guugu Yimithirr man painted for over fifty years. His paintings, under pinned by the traditional art of his ancestors, explore the contemporary social landscape of community life. McIvor lived at Hope Vale, 50km north of Cooktown. He served as the Chairman of the Hope Vale Arts and Cultural Centre and was influential in the promotion of Indigenous art and culture at Hope Vale. Until recently he was a long-term member of the Cairns based UMI Arts (Sheridan Street). Roy started printmaking around 2001-02 when he was enrolled in the Cairns TAFE program. There one of his teachers was Theo Tremblay who operates his print studio from Canopy Arts Centre in Cairns. Following this course Roy collaborated with Tremblay on a number of print series working across linocut, lithography and etching. In conversation with Roy, Theo asked him what he remembered about the war years and Roy in return recounted his experience as a child in Hope Vale during this time.