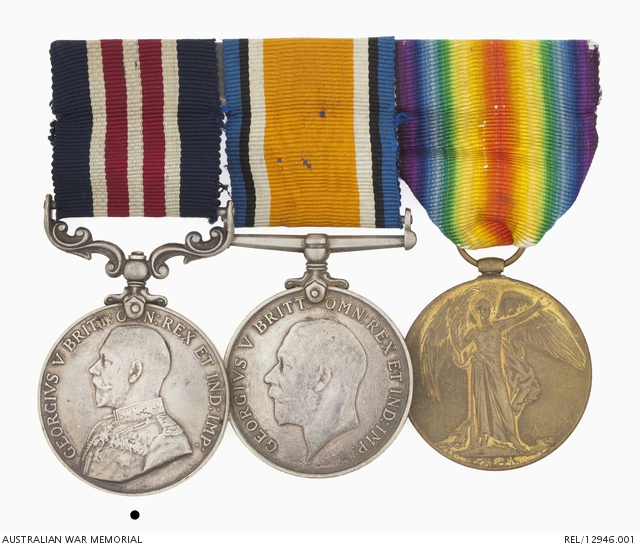 Military Medal (Geo V). Impressed around the edge with the recipient's details.

Born at Nathalia, Victoria in 1898, Claude Henry Watson Knowles was single and working as a farm labourer when he enlisted in the AIF in February 1917. 2317 Trooper C H W Knowles embarked aboard A29 HMAT Suevic at Port Melbourne in June 1917 with the 18th Reinforcements to the 13th Light Horse Regiment. He arrived in England in August 1917 and was soon after transferred to the Artillery; joining the 1st Field Artillery Brigade in France during November.

While serving with the 3rd Battery Australian Field Artillery, Knowles, together with 35590 Gunner William Bridgement, was awarded the Military Medal for his actions during fighting at Proyart, France on 22 and 23 August 1918. The citation reads, 'For conspicuous gallantry and devotion to duty on 22nd/23rd Aug., 1918 at PROYART. As Linesman with the group Forward Observing Officer Gnrs. BRIDGEMENT and KNOWLES established and maintained communication with Battalion Battel [sic] Headquarters, under exceptional heavy shell and machine gun fire they were constantly repairing the line during the whole night and succeeded in keeping the F.O.O. [Forward Observation Officer] in constant touch with the Battalion Commander, affording their Brigade full opportunities to support the advancing Infantry.'.