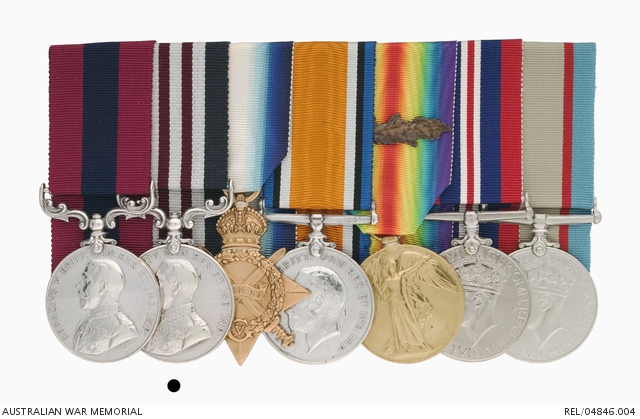 Charles Alfred Birtles was born at Beechworth, Victoria, in June 1889, and was working as a labourer before he enlisted in the AIF on 9 July 1915. With the service number 2117, he sailed from Sydney in September of the same year with the 4th Reinforcements to 19 Battalion. Serving as a Lewis gunner on the Western Front, he was Mentioned in Despatches for bravery in the attack on Flers in November 1916. The following year, he was awarded the Distinguished Conduct Medal for gallantry during the advance to the Hindenburg Line, and the Miltary Medal for his courage and initiative at Zonnebeke, near Ypres. He was also promoted to sergeant. Commissioned in 1918, Birtles transferred to the Australian Flying Corps, and trained as a pilot on Sopwith Snipes, but the war ended before he could receive an operational posting, and he returned to Australia in May 1919. He enlisted again during the Second World War, serving as Lieutenant N75439 with 1 Pioneer Training Battalion at Wallgrove NSW, and later settling in Canberra. The citation for the MM reads as follows: 'During the attack east of ZONNEBEKE on 9th October Sgt BIRTLES was in charge of the Lewis Guns of his Company and moved forward to attack the enemy in DAISY WOOD. He showed courage and initiative of highest order in moving from gun to gun during heaviest enemy shelling picking targets and giving covering fire. Although wounded in the arm he continued regardless of his own condition and safety to carry out the work of engaging the enemy with great accuracy of fire. His splendid example was largely responsible for the success of the operations.'