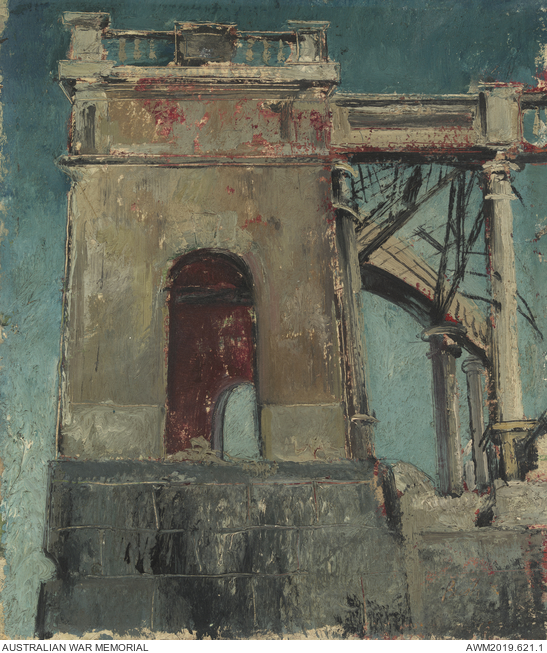 The painting depicts the burnt shell of the Baucau market. The Portuguese colonial building was destroyed during the Japanese occupation of the town and during the guerrilla war against the Japanese the Australian independent companies operated in this area. When the Japanese invasion force swept across Timor in February 1942 the defenders of the island outpost were quickly overwhelmed by the rapid Japanese attack. However, the men of the 2/2nd and 2/4th Independent Companies waged an effective guerrilla war against the occupying Japanese.

Due to the fact that there were Australians fighting for survival and there was no artists among them, no artistic record of these events were created as the events were unfolding. It was decided in 1945, that Charles Bush would be appointed as an official war artist and travel to Timor to record locations significant to this campaign. The Australian army military history section field team arrived in Timor just after the Japanese surrender in 1945. The team included Bush, photographer Keith Davis, and veterans of the 1942–43 Timor campaign to act as guides.

Baucau also has significance to more contemporary Australian deployments, with an FOB located in the township during the INTERFET peacekeeping operations.