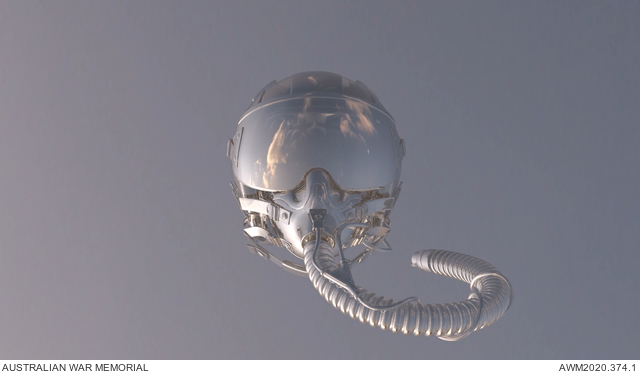 ‘HGU-55/P’ was created by Baden Pailthorpe as part of a body of research examining the unique spatial qualities of the military. Pailthorpe describes the ‘contemporary military apparatus’ as one ‘whose structure is increasingly atmospheric, invisible and remote.’1 Pailthorpe’s research focussed on drones, computer simulation programs and flying technology – technologies that relate to intangible spaces of virtual reality and the air. His work proposes new ways to understand these spaces and translate them into visual form, and how myth is built around them.

‘HGU-55/P’ is an animated video of a HGU-55/P flying helmet. These helmets are designed for high g-force operations and were used during the first gulf war, a conflict that involved extensive air campaigns and television coverage criticised as focussing on high-tech aircraft operations that propagandised American participation in the war rather than reporting its brutal reality.

The work begins with blue sky and clouds before tracking closely over the highly mirrored surface of the helmet and travelling slowly up the ribbed oxygen tube. Eventually the helmet is shown mystically suspended in the air. An accompanying soundtrack of ambient music heightens the aura and reverence that high-performance flight technology is imbued with in our imagination.

In this work, the helmet becomes symbolic of how military technology produces transcendent experiences and myth. The helmet is an interface between the vulnerable human body and the forces of reality – in this case, air and gravity, which are both life-sustaining and deadly when entered at high altitudes and speed. At the same time, the helmet is mythologised through museum collections, marketing and media production.