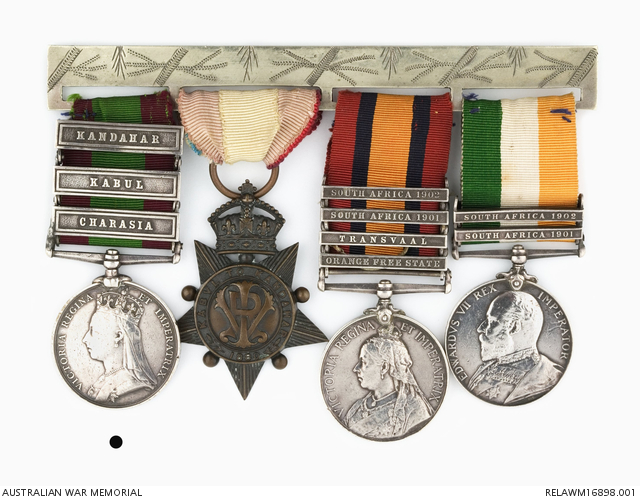 Afghanistan Medal 1878-80 with bars 'CHARASIA', 'KABUL' and 'KHANDAHAR'. Engraved around edge with recipient's details. Obverse: The veiled bust of Queen Victoria facing left with the legend 'VICTORIA REGINA ET IMPERATOR' around the circumference. Reverse: A military column on the march, with an elephant carrying a field gun behind an officer on horseback. The word 'AFGHANISTAN' at the top left circumference and the dates '1878-79-80' in the exergue. The medal is fitted with a straight bar swivelling suspender and a piece of 32 mm green ribbon which has broad crimson edge stripes. Four medals are attached to a silver slotted brooch bar engraved with a crude foliage design that has the reverse pin missing.

Awarded to 860 Trooper William Henry Clarke, who served in the British Army with the 15th Hussars, in the Second Afghan War (1878-1880). He later served in the Boer War in the Diamonds Fields Horse, a British irregular unit, before migrating to Australia. Although this medal is correctly named it has three clasps to which the 15th Hussars were not entitled. They were awarded the medal only for this war. It is possible that Clarke was temporarily attached to another unit, making him eligible for the clasps.