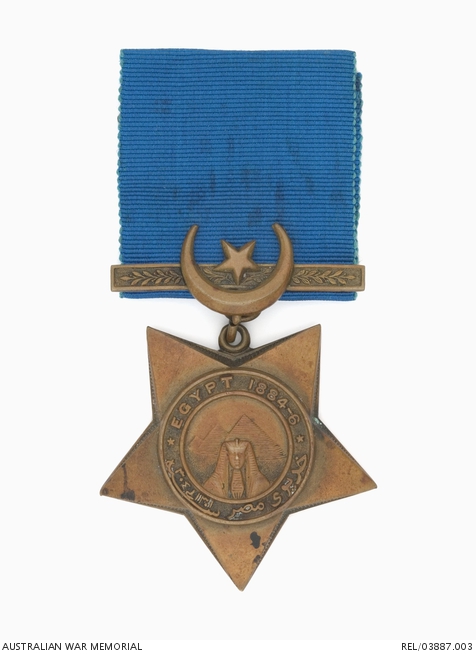 Khedive's Bronze Star dated 1884 - 86. Unnamed as issued. Obverse: In the centre is the Sphinx with the three Great Pyramids in the background. Around this is a raised band, on the upper part of which is embossed 'EGYPT' followed by the dates '1884-6'. The lower part of the band is embossed in Arabic 'KHEDIVE OF EGYPT' with the appropriate date. Reverse: The Khedive's monogram 'T.M.' surmounted by a crown within a raised band. The suspender is a small fixed loop attached between the two uppermost rays of the star. A loose ring is attached to the loop joining a straight laureated bar bearing a crescent moon and a small five pointed star. A small piece of 39 mm plain blue ribbon is attached to the suspender bar.

This medal was awarded to Private (Pte) 65 Jonas Goode Nelson, originally of Oxford, England. Pte Nelson came to Australia with his parents at the age of three and eventually settled in Goulburn, New South Wales. His father Constable Samuel Nelson, served at Collector, NSW and was shot by Johnny Dunn, one of the bushrangers in Ben Hall's gang, in 1865. A boot maker by trade, Jonas Nelson enlisted in the New South Wales Contingent to the Sudan on 18 February 1885 at the age of 33. He embarked from Sydney aboard SS Iberia on 3 March 1885. The contingent left Sydney to much public fanfare and arrived at Suakin on 29 March. Once there, the New South Welshmen were attached to a Brigade comprised of Scots, Grenadiers and Coldstream Guards. The contingent then marched to the village of Tamai, 30 kilometres inland. On their journey they came across bodies of soldiers from a recent battle. When they reached Tamai, they burnt the village and returned to Suakin. The majority of the contingent then undertook the construction of a railway line to the inland town of Berber. The New South Wales Contingent did not participate in any actual battles and left for Australia on 17 May 1885. The date of Pte Nelson’s return to Australia is not known, however the Nominal Roll indicates that he was left in hospital in Colombo on the return journey. His final rank is listed as corporal. Upon his return Pte Nelson became a police officer, like his father. He also served in the militia with the Goulburn Volunteer Infantry, 2nd New South Wales Infantry Regiment until 1901. Pte Nelson died in May 1924 and was given a military funeral.