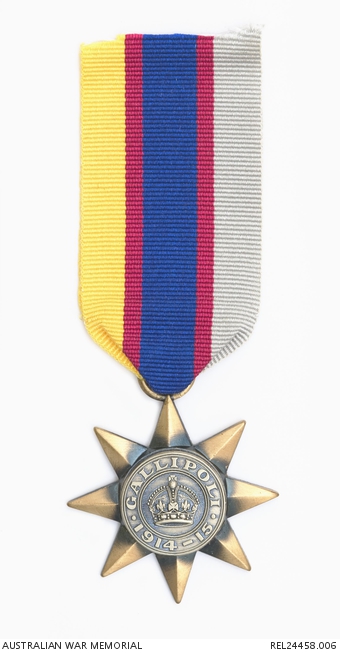 Gallipoli Star presented to commemorate the service of Sergeant Tom Anderson at Anzac in 1915. Thomas Anderson was born in Ballarat, Victoria, in July 1886, and was employed there as a labourer prior to his enlistment in the AIF in December 1914. Posted to 8 Battalion, he sailed as number 1703 with the 4th Reinforcements to the unit in April 1915. With the rank of acting sergeant, he joined 8 Battalion on Gallipoli in May. He was evacuated from the peninsula in September, suffering from suppurating glands in his throat, which required extensive medical treatment. Consequently, Anderson did not rejoin his unit, by then in France, until mid-1916. He was wounded later in the year, probably in the fighting around Pozières and Mouquet Farm on the Somme, but recovered quickly, and was back with the battalion by September. In October 1917, he was awarded the Distinguished Conduct Medal for courage and leadership in the attack on Broodseinde Ridge, but by the time the award was announced in November, he had already been commissioned in the field as a 2nd lieutenant. Promoted to lieutenant in March 1918, Anderson was awarded the Military Cross for his gallantry in the Allied August offensive. He returned to Australia in late 1919, and his AIF appointment was terminated in January 1920. The Gallipoli Star was manufactured at his own expense in 1990 by Mr Ross Smith, a former Australian Army Warrant Officer and Vietnam veteran, who had them made from the original designs, (which were not approved for issue by King George V) to present to surviving Australian and New Zealand Anzac veterans.