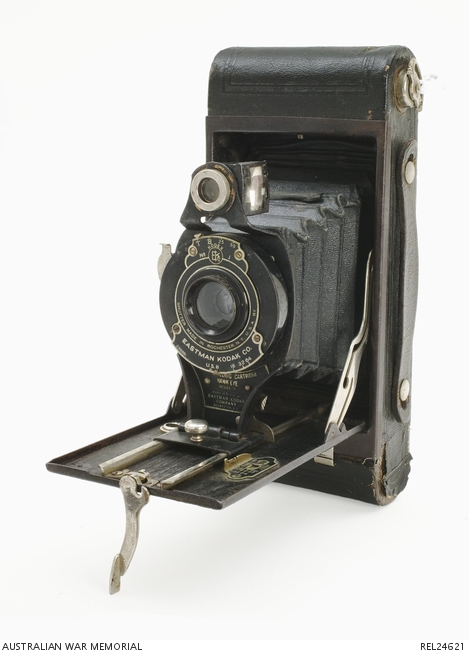 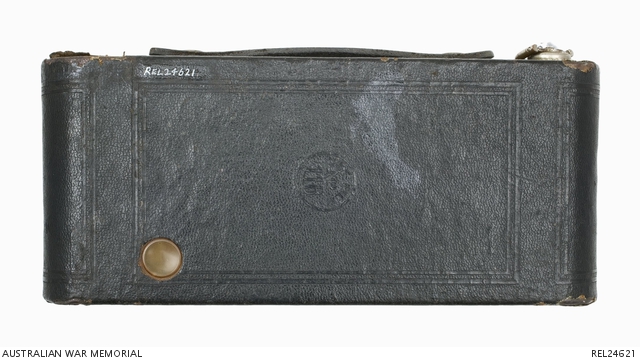 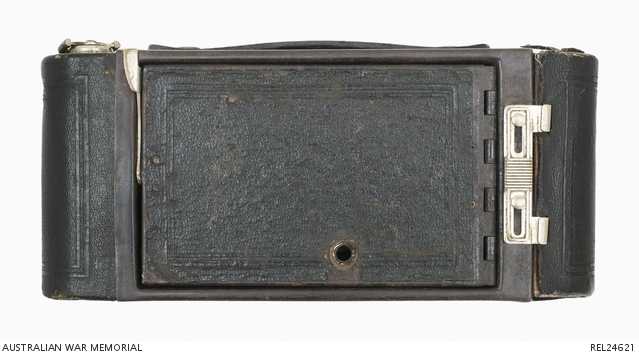 Rectangular Eastman Kodak No 2A Folding cartridge, 'Hawkeye' Model B camera. The camera is designed to take number 116 type roll film. It has a pressed steel body with rounded ends, and has been finished in a black textured leatherette covering. A hinged door fitted to the front of the camera can be opened or closed to expand or store the lens housing as required. The lens housing is mounted to a blackened metal plate which is connected to a collapsable black paper and fabric bellows and a black and chrome plated steel slide. There is a swivelling prismatic glass view finder allowing photographs to be taken in landscape or portrait format. At the rear corner of the camera body is a circular amber film viewing window. Fitted to the top of the camera is a chrome plated brass spool winder and a leather carry strap, while on the side is a sliding double catch that opens and locks the film compartment as required. An empty steel film spool is stored inside.

This camera was carried by NX121926 Sapper George Douglas 'Doug' Shearston of 2/1 Pioneer Battalion, who used it in August 1945 to take photographs of the Japanese surrender to Australian forces at Balikpapan, Borneo. Some of these photographs later appeared in the unit's history 'The Pioneers', which was published in 1988, and copies were also donated to the Australian War Memorial as P00919.001 and .002. Doug Shearston was born at Belmore, New South Wales, on 10 September 1914, and enlisted in the AIF at St Ives on 6 August 1942. He served with No 1 Platoon, Headquarters Company, 2/1 Pioneer Battalion, and was discharged on 4 January 1946.