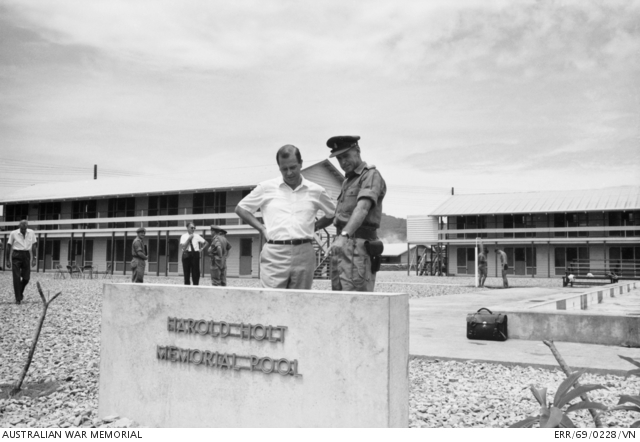 Vung Tau, South Vietnam. 1969-04. During a five day tour of Australian troop locations in Vietnam, the Minister for the Army, Phillip Lynch, is shown the commemorative plaque at the Harold Holt Memorial Pool at the 1st Australian Logistic Support Group (1ALSG) by the Assistant Director of Amenities and Welfare, Lieutenant Colonel (Lt Col) Graham Thompson of Point Piper, NSW. In the background is the Australian Ambassador to Vietnam, Mr R. L. Harry, and the Commander of 1ALSG Lt Col John Stevenson of Campbell, ACT. The pool, donated by the NSW Sportsmen's Appeal, is part of the recreational facilities at the base.