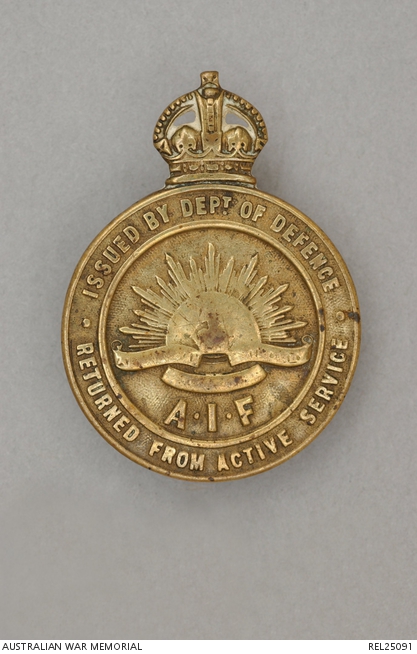 Circular brass badge, with lettering around the edge 'ISSUED BY DEPT. OF DEFENCE/ RETURNED FROM ACTIVE SERVICE. In the centre a Rising Sun badge and 'A.I.F.' and surmounted by an Imperial crown. Badge is impressed on the reverse with the serial number '37907'.

5399 Sergeant Finlay Duff Stewart, enlisted on 8 November 1915 in 19 Battalion, AIF. He returned to Australia on 10 December 1917 and was discharged medically unfit on 19 January 1918. Stewart was Acting Sergeant for the voyage to the United Kingdom, reverting to Private on marching in to his unit in the United Kingdom. After his discharge he joined the Merchant Navy, being engaged in the SS Ayrshire on 30 March 1918 and the SS Zealandic on 10 January 1919. As N68699 Private F D Stewart he served in 2 Garrison Battalion during the Second World War.