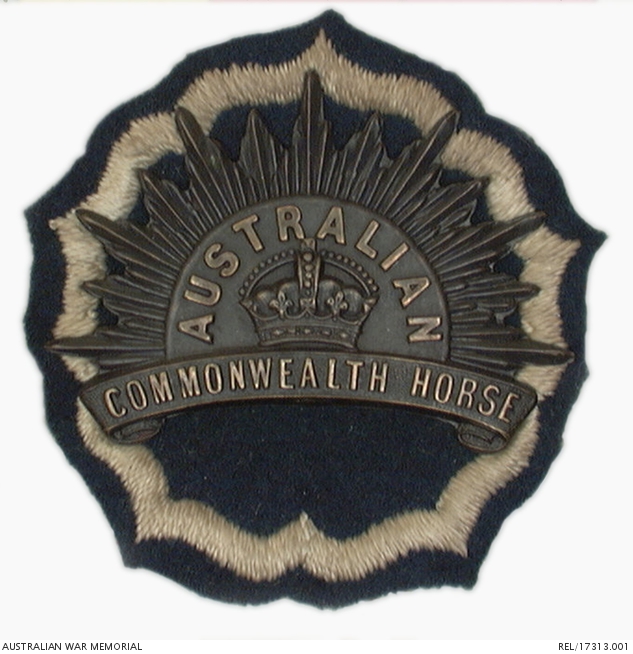 Australian Commonwealth Horse (2nd pattern) oxidised brass hat badge with Rising Sun pattern rays, curved 'AUSTRALIA' over a tudor crown, and underneath a scroll with 'COMMONWEALTH HORSE'. The words on the badge have been highlighted by rubbing back the oxidisation to show the brighter brass. Badge is mounted on dark green cloth, edged with white stem stitch embroidery, cut in the pattern of a five petalled tudor rose. Badges with this cloth backing were worn by members of the Australian Commonwealth Horse selected to attend the coronation of Edward VII in London in 1902.

Worn by Sergeant Thomas Judd, Australian Commonwealth Horse, when he attended the coronation of Edward VII in London, in 1902. Judd was born at Cuxton, Kent (United Kingdom) in 1867, and served as a young man with the 1st Battalion, 'The Buffs' (Royal East Kent Regiment) in India, rising to the rank of sergeant. The battalion was sent to Malta in 1885 and subsequently proceeded to India. It took part in the Chitral campaign of 1895 and in operation on the North-West Frontier in 1897-1898. Judd later emigrated to Australia, and enlisted for service in the Boer War in 1901 as Private 990 with the Victorian Mounted Rifles (5th Victorian Contingent). He was then selected as a member of the coronation contingent to London. After his return to Australia, Judd continued to serve in the Ballarat Militia as a medical orderly, and at the outbreak of war in August 1914, despite his age of 47, enlisted in the AIF, becoming Private 143 with 2 Field Ambulance. Wounded at Gallipoli in 1915, he returned to Australia and was discharged in May 1917. He continued to serve as a medical orderly in Australia, and was finally discharged from military service with 5 Light Horse Field Ambulance at Ballarat in 1920, aged 53.