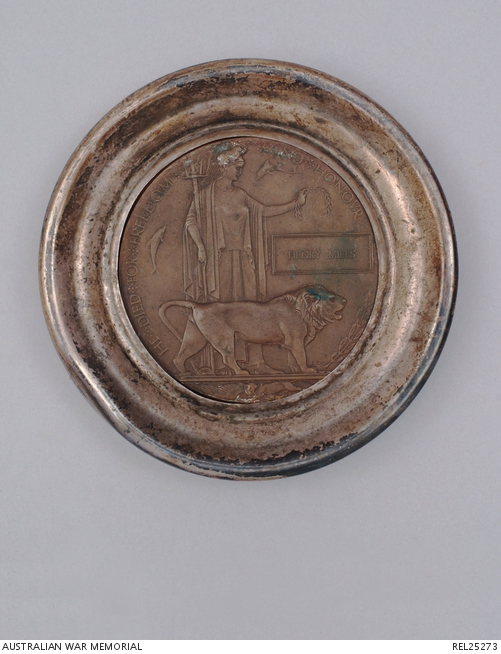 Bronze next of kin plaque, showing on the obverse, Britannia holding a laurel wreath, the British lion, dolphins, a spray of oak leaves and the words 'HE DIED FOR FREEDOM AND HONOUR' around the edge. Beneath the main figures, the British lion defeats the German eagle. The initials 'ECP', for the designer Edward Carter Preston appear above the lion's right forepaw. A raised rectangle above the lion's head bears the name 'HENRY MILLS'. The plaque is held in a circular metal frame.

Born in Sydney, New South Wales in 1894, Henry McIntosh Hopping 'Tibby' Mills was employed as a carpenter and joiner when he enlisted in the AIF on 10 October 1916, using the name 'Henry Mills'. Posted as a private to the 8th Reinforcements to the 9th Machine Gun Company, service number 554, Mills trained in Seymour, Victoria before embarking for overseas service from Melbourne aboard RMS Osterley on 14 February 1917.

Mills arrived in England in April, where he undertook further training, finally joining his unit in France at the end of August. He took part in fighting at Zonnebeke and Passchendaele in Belgium, during the third battle of Ypres but was evacuated to hospital in England, suffering from trench fever, at the end of October. While recuperating there the machine gun companies were amalgamated into five battalions, one for each Australian Division. The 9th Company became part of the 3rd Machine Gun Battalion, and Mills returned to this unit in France in April 1918.

Mills was killed by two machine gun bullets to the head, near Accroche Wood outside Hamel, early in the morning of 8 August when the advance of the 9th Company was held up by two German machine gun nests. Although some witnesses to his death were sure that he had been buried and a cross erected over his grave, others stated that his body had been placed on top of a trench before following orders to advance without waiting with the wounded or dead. Mills' body was not recovered after the war and his name is commemorated on the Villers-Bretonneux Memorial.

At the time of his death Mills would not yet have received the news that his father, his nominated next of kin, had died a month earlier. His mother, Jessie, received this commemorative plaque in her son's honour in December 1922.