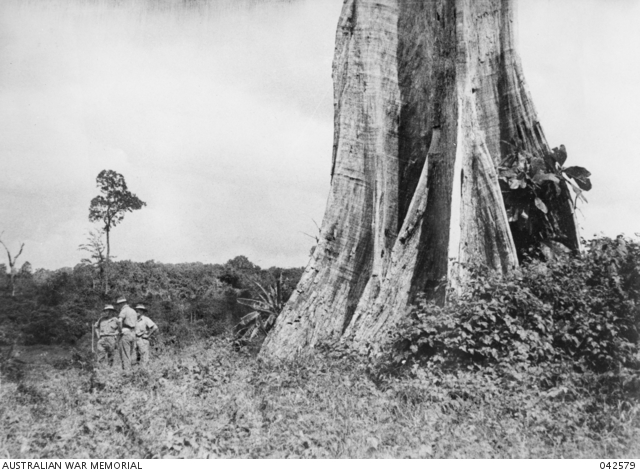 'Sandakan-Ranau Death Marches Reward Mission. At the latter end of 1946, a military mission in charge of Major H W S Jackson, representing the Australian Government, and Major R K Dyce, representing the British Government, was sent to British North Borneo to repay and reward the natives who aided and succoured the Australian prisoners of war during the infamous Sandakan-Ranau death marches. In addition to other military personnel, Mr C Simpson went as writer for the ABC and BBC, and Mr W MacFarlane as recording technician. The Mission retraced stretches of the actual Death March track, and in all travelled 185 miles on foot.' Between July 1942 and March 1943, 1800 Australians and 600 British mixed troops captured in Malaya and Java, were incarcerated in the Sandakan prisoner of war (POW) camp, North Borneo. On 28 January 1945, the Japanese decided to send the POW's on, what is now known as, the death marches from Sandakan to Ranau. Only six Australians survived. Seen is a huge Billian tree in the former POW camp, eight miles from Sandakan. A section of the track the prisoners marched along.