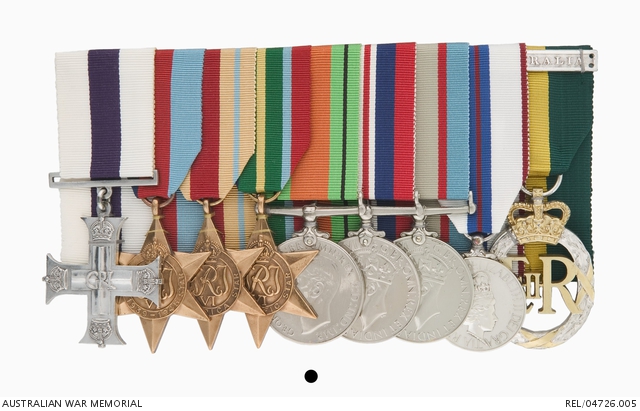 Richard Thomas 'Dick' Eason was born at Geelong, Victoria, in November 1913. He joined the Post Master General's Department as a young man, starting as a telegram boy and working his way up to trainee Telephone Technician by 1939. He also joined the Militia in 1937, becoming a gunner in the Royal Australian Artillery, and enlisted in the AIF in late 1939. With the service number VX998, he was posted to 2/2 Field Regiment RAA, and quickly rose to the rank of sergeant. Eason was reputedly offered a commission prior to embarkation, but refused, as this would have meant leaving the regiment. In any case, he was granted a commission in the field in September 1940, after the unit arrived in North Africa. He served as a lieutenant during the Libyan offensives, and throughout the disastrous campaigns in Greece and Crete, before returning to Australia in 1942. It was some considerable time before 2/2 Field Regiment was again committed to fighting, in the Aitape-Wewak area of New Guinea. In March 1945, Eason, now holding the rank of captain, was involved in an action at Arohemi, near the Anumb River, which led to his being awarded the Military Cross. He was discharged in September 1945, but soon rejoined the Citizens Military Forces (CMF), and in 1954, with the rank of lieutenant colonel, was given command of 22 Field Regiment. He led this armoured unit, which was equipped with the 'Yeramba' self-propelled 25 pounder gun, until it was disbanded in 1957. A variety of staff positions followed, and in 1959, he was promoted to the rank of brigadier, becoming Commander, Royal Australian Artillery, to the 3rd Division. He had also been successful in his post-war career with the Post Master General's Department, and for many years was Instructor at the PMG Technician's Training School, as well as chairman of the Victorian Country Fire Authority and a prominent member of the RSL. Dick Eason retired in 1978, but died suddenly in November of the following year.