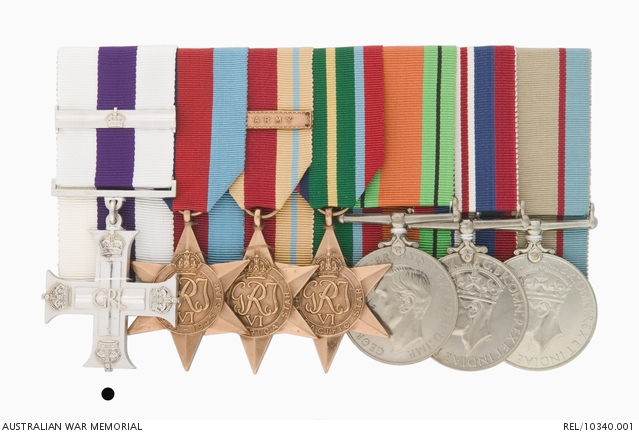 Military Cross and bar. Impressed reverse with year of issue.

VX17668 Lieutenant John Edwin McKeddie of East Malvern, Victoria. Born 25 November 1902. Enlisted 27 May 1940. Commissioned 15 November 1940. Served with 2/12 Australian Field Regiment. Recommendation for award of Military Cross reads: 'On the afternoon of 1 Oct 43, Lieut McKEDDIE was FOO with a company of the 2/13 Bn during their attack on an enemy position on high ground in the vicinity of KAKAKOG. For more than an hour this officer was under heavy LMG, rifle and mortar fire from three sides. During this period Lieut McKeddie, with complete disregard for his own safety continued to observe and to bring accurate fire on the enemy positions. His coolness and devotion to duty, in difficult and dangerous conditions, were outstanding.' Recommendation for award of a bar to the Military Cross reads: 'For gallant and distinguished service in operations against the enemy in the SATELBERG and WAREO areas. On the night of 2/3 Dec 43 Lieut McKeddie was FOO with the 2/23 BN in the vicinity of KUANKO village. In the evening the Bn perimeter was heavily counter attacked; this officer occupied his observation post under enfilade machine gun fire and for one and a half hours engaged the enemy forces in an area leass than 100 yards from the forward troops. Lieut McKEDDIE carried out his duties with complete disregard to his personal danger and his efficient direction of fire was largely responsible for breaking up the enemy attacks. Lieut McKeddie's unfailing cheerfulness, gallantry and eagerness to accept personal risk in order to best perform his duties, were an inspiration to all associated with him and made a lasting impression on all ranks of the battalion he was supporting.'