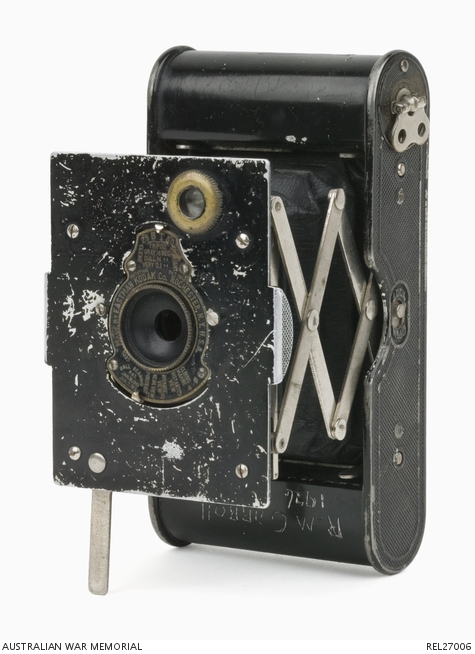 Kodak Vest Pocket Autographic Camera. This folding camera has a painted black aluminium body with rounded ends and brass fittings. It is opened by extending the front plate which connects the lens housing to collapsible paper bellows. There is a swiveling viewfinder to enable photographs to be taken in portrait and landscape formats. On the back of the camera is an exposure counter and the autographic feature, with a hinged flap secured with a stylus. The camera is fitted with a Kodak ball bearing shutter and uses roll film type 127. Scratched into the camera body is '1280/ J. CARROLL/ 4th Rly Unit/ 1916 A.I.F' and 'R M Carroll/ 1926'.

Associated with the service of Lieutenant Joseph Ignatius Carroll, born in Kupunda, South Australia. On 23 January 1917, at the age of 23, Carroll enlisted in the Army as 1280 Company Sergeant Major Warrant Officer Class II and in May left Melbourne onboard HMAT Shropshire. He served in 4 Broad Gauge Railway Operating Company and was awarded a Distinguished Conduct Medal in March 1918 at Villers Faucon. He was subsequently commissioned. Carroll later became the General Manager of Email Australia, a manufacturer of kitchen and whitegoods.