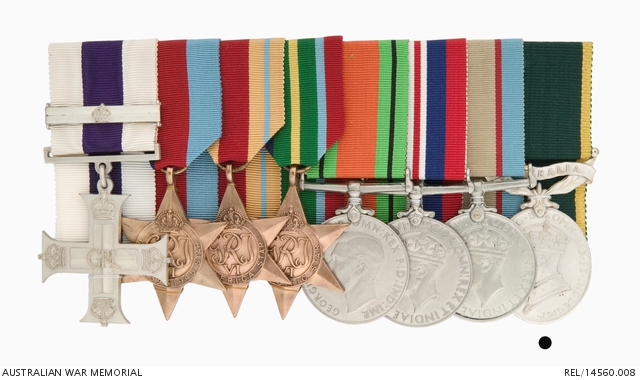 Linden Arthur 'Lin' Cameron was born at Warracknabeal, Victoria, in March 1918. He was working as a clerk, and serving with a local Militia unit, prior to enlisting the AIF in November 1939. He joined 2/5 Infantry Battalion with the service number VX3347, and was commissioned in the same unit in March 1941, serving throughout the campaigns in Libya, Greece and Syria before returning to Australia in July 1942. In New Guinea, he initially led 10 Platoon of D Company, and later, with the rank of captain, became company commander. Cameron was awarded the Military Cross following an action on 8 February 1943 at Crystal Creek, in the Wau-Salamaua area. In 1945, for his courage and leadership of D Company at Perembil, in the Aitape-Wewak region, he was awarded a Bar to the Military Cross, becoming one of only 16 Australians to receive the MC twice during the Second World War. He remained in the Army post-war, eventually taking his discharge in 1948. Lin Cameron died at his home at Dunkeld, Victoria, in March 1986. At the time of his death, he had been contributing to the production of 2/5 Battalion's history 'All the King's Enemies', which was published in 1988. Cameron's pre-war service in the Militia meant that he qualified for the Efficiency Medal after 12 years of service. Each year of service during the Second World War was counted as two in terms of the qualifying period, so he would have been entitled to the medal by the end of the war. The Efficiency Medal is awarded only to warrant officers, NCOs and men, but since Cameron was not commissioned until 1941 he remained eligable to receive it.