Studio portrait of Lieutenant Wilfred Graham Salmon of the Royal Flying Corps (RFC) who was ... 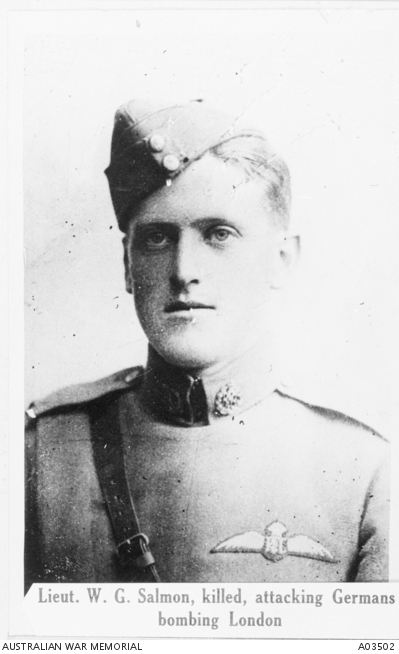 Studio portrait of Lieutenant Wilfred Graham Salmon of the Royal Flying Corps (RFC) who was killed during a German bombing raid on London on 7 July 1917 and buried in the Dartford (Watling Street) Cemetery, Dartford, Kent, UK. As a 20 year old station manager from Ballarat, Victoria, he enlisted in the AIF on 12 July 1915 as a Driver (Dvr) and was given the service number 6413. Dvr Salmon embarked for overseas with the 10th Battery, 4th Field Artillery Brigade, from Melbourne aboard HMAT Wiltshire (A18) on 18 November 1915. After a short period in Egypt, he proceeded to France in March 1916 and then joined the RFC Training Depot in November of that year. Dvr Salmon was discharged from the AIF on 16 March 1917 and granted a commission in the RFC. His brother 6414 Dvr John Walker Salmon embarked in the same ship and returned to Australia after the war as a Second Lieutenant.