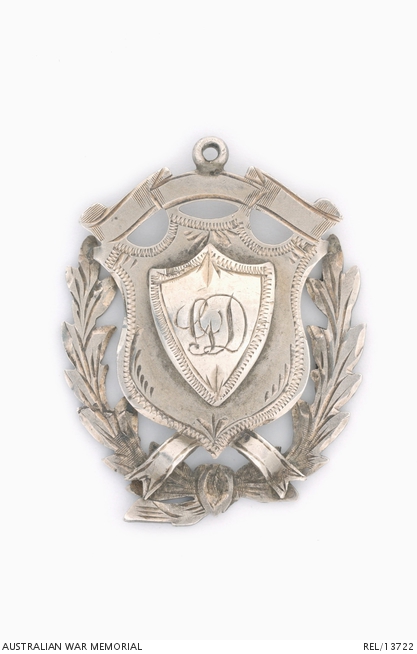 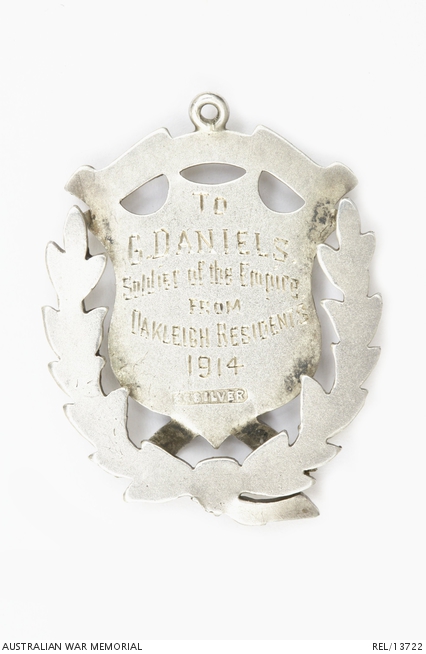 A sterling silver watch fob constructed in three layers; the lower is a wreath of leaves to which is soldered a shield with an integral suspension loop attached. Soldered to the centre of this is a smaller shield of curved profile which sits proud. Both shields are intricately patterned along their borders, while the central shield is engraved "GD" in cursive script. The reverse of the main shield is engraved: "TO / G. DANIELS. [sic] / Soldier of the Empire / FROM / OAKLEIGH RESIDENTS / 1914 ". A sterling silver stamp appears below this text.

Giles Felix Daniel was a member of the Victorian permanent forces, he served as a corporal (regimental number 8) with the First Victorian Mounted Infantry Company, part of the first Victorian Contingent to the war in South Africa in 1899, serving there until December 1900.

This watch fob was presented to him by the residents of Oakleigh after his enlistment in the AIF on 19 August 1914. He served as a lance corporal with the First Divisional Signals Company during the Gallipoli campaign. He returned to Australia in 1916 where he was discharged medically unfit. He enlisted for service within Australia in February 1917 and served until 1919.