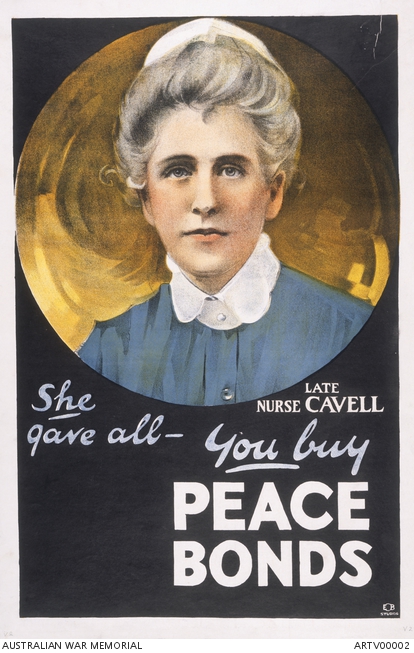 Portrait of the late Nurse Edith Cavell, advertising Peace Bonds for sale. Edith Cavell (1865-1915) was a British nurse executed by the Germans for helping hundreds of Allied soldiers flee occupied Belgium for the Netherlands. Upon arrest she was charged with harbouring Allied soldiers, despite also having helped save the lives of German soldiers. Her subsequent execution received worldwide press coverage, making Cavell the most prominant First World War female casualty within the United Kingdom. Military recruitment propaganda adopted her as an iconic figure who epitomised ideal feminine qualities of compassion matched wtih heroism. Despite being aged 49 when she died, propaganda often depicted her as a younger woman. Stories of her life omitted anything that didn't fit the dignified and heroic persona extolled by the media.