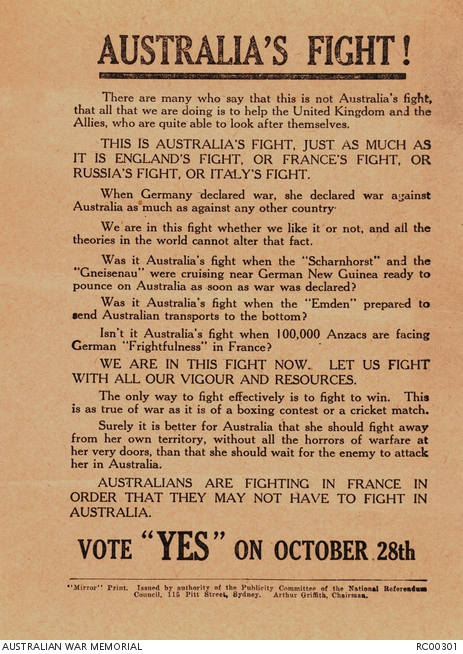 Black and white leaflet encouraging Australian's to "Vote Yes" for conscription. "Australia's fight! There are many who say that this is not Australia's fight, that all we are doing is to help the United Kingdom and the Allies, who are quite able to look after themselves. THIS IS AUSTRALIA'S FIGHT, JUST AS MUCH AS IT IS ENGLAND'S FIGHT, OR FRANCE'S FIGHT, OR RUSSIA'S FIGHT, OR ITALY'S FIGHT. When Germany declared war, she declared war against Australia as much as against any other country. We are in this fight whether we like it or not, and all the theories in the world cannot alter that fact. Was it Australia's fight when the 'Scharnhorst' and the 'Gneisenau' were cruising near German New Guinea ready to pounce on Australia as soon as war was declared? Was it Australia's fight when the 'Emden' prepared to send Australian transports to the bottom? Isn't it Australia's fight when 100,000 Anzacs are facing German 'Frightfulness' in France? WE ARE IN THIS FIGHT NOW. LET US FIGHT WITH ALL OUR VIGOUR AND RESOURCES. The only way to fight effectively is to fight to win. This is as true of war as it is of a boxing contest or a cricket match. Surely it is better for Australia that she should fight away from her own territory, without all the horrors of warfare at her very doors, than that she should wait for the enemy to attack her in Australia. AUSTRALIANS ARE FIGHTING IN FRANCE IN ORDER THAT THEY MAY NOT HAVE TO FIGHT IN AUSTRALIA. VOTE 'YES' ON OCTOBER 28th"