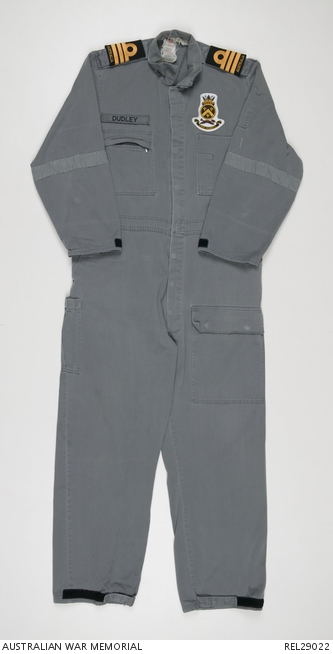 Pair of Royal Australian Navy (RAN) issued size 107R flame retardant combat overalls. Half way down each sleeve and trouser are a single band of 40mm wide reflective tape. Above the left breast pocket is a coloured embroidered badge for the HMAS Jervis Bay. Above the left breast pocket is a name tape embroidered with 'DUDLEY'. Both epaulettes have the RAN rank slide of Commander on them. All buttons are made from metal. Around the cuffs of the sleeves, the bottom of the trouser legs and around the collar are bands of Velcro. The Velcro tabs attached to the collar have remnants of foam and cotton attached.

This pair of combat overalls were worn by the last Captain of the HMAS Jervis Bay, Commander Jonathon 'Jon' Dudley during INTERFET and UNTAET operations between East Timor (now Timor Leste) and Darwin Australia from 1999 to 2001.

The HMAS Jervis Bay (hull number 45), also known as the 'Dili Express', and 'JB', completed 107 return voyages up Darwin to East TImor. It's last voyage to East TImor on 24 April 2001. From September 1999 until April 2001 it carried thousands of defence personnel, equipment, vehicles, food and humanitarian aid. HMAS Jervis Bay was chartered from the Hobart based boat manufacturer INCAT in May 1999 till 11 May 2001. Her fastest return trip between Dili and Darwin was 25 hours, travelling most of the way at approximately 42 knots. During the first days of the INTERFET operation, a number of sandbagged positions were constructed on the forward deck of the unarmed ship from which machine gunners armed with F89 Minimi Light Support Weapons (LSW) would watch as the ship travelled close to unsecured territory when entering and leaving Dili Harbour. The last voyage of the HMAS Jervis Bay involved the transportation of 226 members of the Sydney based 4 Battalion Royal Australian Regiment (Commando) (4RAR-CDO) to East Timor and the return of a similar number of 1RAR troops to Darwin.