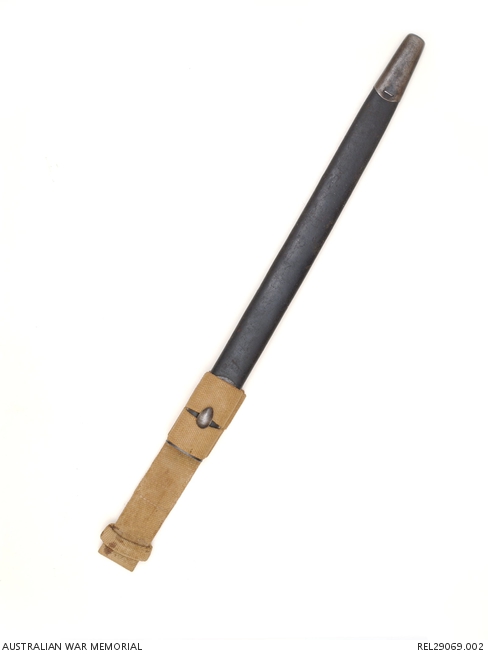 The brown leather scabbard with stitching down the back has a steel frog stud locket and chape.

Scabbard for use with the pattern 1907 sword bayonet. The bayonet was issued to Australian, British and Commonwealth forces during the First and Second World Wars. The introduction of the Pattern 1907 bayonet was approved on 30 January 1908. The inspiration for the bayonet came from the 1906/07 Trials Japanese Pattern Type 30 Arisaka bayonet. All bayonets manufactured up to 1913 featured a hooked quillon. On 29 October 1913 approval was granted to remove the hooked quillon from the crosspiece and resulted in a new pattern of the 1907 Sword bayonet being sealed. There was no advance in the mark number for the new look bayonet and many of the earlier models had their hooked quillons removed during repair. Overall more than 5 million Pattern 07 sword bayonets were produced by manufacturers in England, Australia, India and the USA.