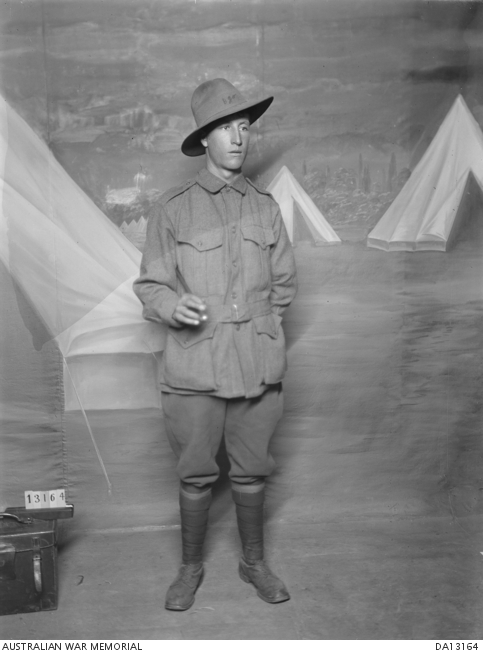 Studio portrait of 3621 Private (Pte) William Robert Taylor. A labourer from Bendigo, Victoria prior to enlistment, Pte Taylor embarked with the 8th Reinforcements, 21st Battalion from Melbourne on HMAT Demosthenes on 29 December 1915. He later transferred to the 57th Battalion and was admitted to hospital suffering from otorrhoea. After re-joining his battalion he was accidently wounded in the right elbow and was re-admitted to hospital suffering from myalgia. After a number of unauthorised absences he was sentenced to fifteen years imprisonment which was later commuted to two years intensive hard labour. The unexpired portion of his sentence was later remitted and he returned to Australia on 16 October 1919. This is one of a series of photographs taken by the Darge Photographic Company which had a permit to take photographs at the Broadmeadows and Seymour army camps during the First World War. In the 1930s, the Australian War Memorial purchased the original glass negatives from Algernon Darge, along with the photographers' notebooks. The notebooks contain brief details, usually a surname or unit name, for each negative.