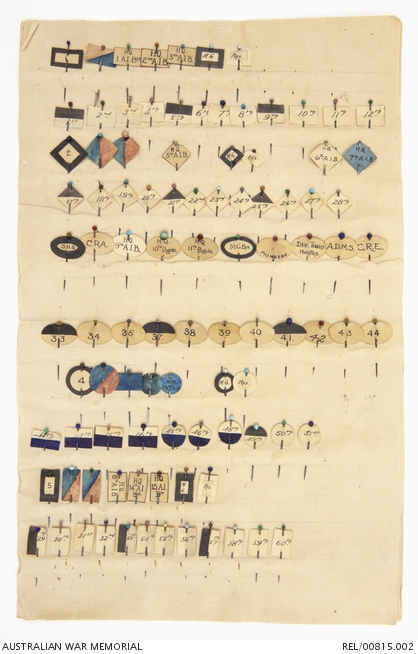 Ten rows of pin flags attached to a thin wad of paper. The 97 flags are made from glass headed pins threaded through rectangular, square, oval circular or diamond paper tags, which are plain or coloured to reflect unit cloth patches that were worn on Australian uniforms. Most have the names of the units written on them.

These small flags, miniatures of unit colour patches, were made for General Sir John Monash when he was in command of the Australian Corps. As each unit shuttled from one part of the line to the other, the flags were moved on a master map at his headquarters, enabling him to see at a glance where they were located.

Meanwhile, he and a friend had established a private engineering practice in 1894. The business grew steadily but a series of setbacks left him with large debts in 1902. Starting again, Monash recovered and became wealthy. He also gained promotion to lieutenant colonel in the Australian Intelligence Corps in 1908. Now prospering both in business and the Army, in 1913 Colonel Monash took command of the 13th Infantry Brigade.

After the outbreak of war, Monash took command of the AIF's 4th Infantry Brigade, landing at Gallipoli on 26 April 1915. In July he was promoted to brigadier. Monash took his brigade to France in June 1916. He became a major general in July and took command of the 3rd Division. The division's first major battle, Messines, was hailed as a great success. Further successes followed and in May 1918, Monash was promoted to lieutenant general and given command of the Australian Corps. His first battle in this role, Hamel, came to be considered the 'perfect battle'. Monash remained in command through the victorious battles in the last months of the war.

Monash was promoted to general in November 1929. He died of heart disease in Melbourne on 8 October 1931 and was given a state funeral attended by some 250,000 mourners.